Find a great deal on the Samsung Galaxy S10 with Tiger Mobiles. The latest flagship release from Samsung has a lot to give. Tons of power, a top end screen, triple lens rear camera, and so much more. It’s going to cost you, but if you’re looking for the best of the best, then this could be the phone for you. Check out our fantastic deals on the Samsung Galaxy S10 below. 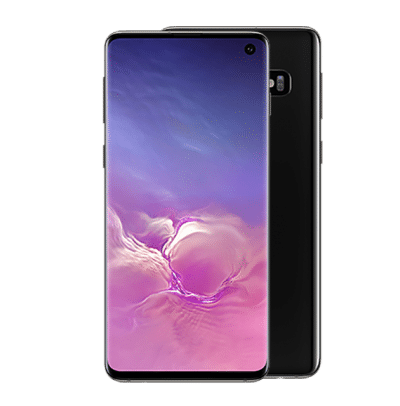 About the Samsung Galaxy S10

There’s a reason that Samsung are one of the top mobile manufacturers in the world, and that reason is their best selling Galaxy S series. This year, Samsung have released three versions of the S10, and the middle model, the regular S10, is a stunning flagship phone. But is it really necessary? After all, the S9 is only a year old. In this case, we’re going to go with yes, since the S10 is a solid upgrade to the S9, and gets you a lot more bang for your buck.

Why should you be dying to get your hands on one? That huge display is magnificent, and performance is second to none, but the biggest selling point here is probably going to be that monster triple lens rear camera. Okay, the S10 is going to cost you a bunch, but if you want the best you have to be willing to pay the price.

The S10 is all screen. There’s no sign of bezels here, and no notch either, just a small round dot in the top right corner to house the front camera, giving the Infinity O screen its name. You’re getting sleek edges and rounded corners, and a solid glass and aluminium build that makes the S10 look and feel premium.

Under the hood, you’re getting unbelievable power, as well as some massive upgrades. Tons of RAM, a huge dynamic AMOLED display, a triple lens rear camera, and some cool extra features as well. All of this adds up to a flagship phone that is a real stunner.

Okay, the Galaxy S10 doesn’t come cheap. In fact, the S10 has had a price hike when compared to the earlier S9 model. But with top of the line specs and looks, we wouldn’t really expect much different. Flagship phones cost flagship prices, but the S10 is a fantastic investment.

Those Performance and Power Specs

Obviously, performance is going to be a big part of your buying decision, and the S10 has some unbelievable specs. You’re getting octo core processing here with a quad core 1.78 GHz processor, a triple core 2.41 GHz processor, and a single core 2.84 GHz processor. Add in a solid 8 GB of RAM and you’re looking at lightening fast speeds and serious responsiveness.

This is an Android phone, as are all Galaxy phones. You’ll be getting the newest Android incarnation, 9.0 Pie, right out of the box. There’s some cool new features, like a new gesture navigation system, a cool new look, with a more rounded appearance, and the added security and stability that come with the latest OS update.

The bottom line here is that performance is second to none. The S10 is super fast, super responsive, and more than capable of handling anything that you throw at it. You’ll be hard pressed to find better performance specs on any other device right now.

Samsung phones have great displays, but the S10 outmatches anything we’ve seen to date. First up, you’re getting a solid 6.1 inches of screen real estate. That gives you more than enough room for great viewing and comfortable typing, though is does mean that the S10 is slightly bulky, it’s not easy to slip into a pocket.

Resolution numbers are excellent too, with 1440 x 3040 pixels, giving you a whopping 550 PPI. This results in a sharp image with astounding clarity. Add in the fact that this is a Dynamic AMOLED display, and you’re getting excellent colour reproduction and viewing angles as well.

All in all, this is one of the best displays on the market right now. Whether you’re into high-end gaming or HD video, or just web surfing, the display on the S10 is a pleasure to look at, and you’re not going to find much better.

On to the cameras, and there are more incredible specs to be had here too. Up at the front, you’re getting a 10 MP, f/1.9, 26 mm camera, which has dual video call ability. Sharp selfies, and great video calling, what more could you want?

You’re going to get amazing pictures here, that’s really all you need to know. From action shots to portraits, the S10 takes some of the best mobile photos around, making this camera set a huge selling point for most people.

This is a flagship phone, so there are tons of special features and we can’t mention all of them. There are a few stand outs, however. This is an IP 68 certified device, so it’s dustproof and waterproof (in up to 1.5 metres of water for up to 30 minutes), always a nice safety net just in case.

You might notice that the traditional fingerprint sensor is missing. That’s because it’s under the screen, all you need to do is press your finger to the lower half of the screen to unlock. And Samsung Pay is included too, so you can use your Visa or Mastercard safely.

There’s a massive 3400 mAh battery on board, which Samsung claims is enough to last all day. You get fast charging and wireless charging too. Plus, there’s a Wireless Power Share option, that allows you to simply place a wireless charging device (such as wireless earbuds or a friend’s phone) on the back of your S10 and have it charge from your phone. A nice touch if you have some extra battery life to share.

The Galaxy S10 comes in a whole host of colours, from the traditional black and white, to blue, pink, yellow and green. There’s a 128 GB and a 512 GB internal storage version available. Both of these, however, come with a microSD card slot so you can add up to 512 GB of extra storage should you need it.

So, how much exactly is all of this going to cost you? Firstly, this is a Samsung Galaxy, one of the most popular phone brands around, so you should be able to find one with nearly all operators and at nearly all electronics retailers. If you’re going SIM free then the 128 GB version of the S10 is going to cost you around £799, with the 512 GB version going for a breathtaking £999. If you prefer to go for a contract phone then prices are going from around £40 a month plus £99 up front.

As with all high end phones if you’re contract shopping you should be looking for big data limits, since the S10 is likely to suck down data pretty fast. Do ensure that you’re getting a 4G contract too, for faster mobile date. You might be able to save a little and grab a smaller data package if you’re usually connected to WiFi though. Many operators are currently offering the S10 with the gift of free Samsung wireless earbuds, so you might want to look out for that.

In terms of savings on buying the actual phone itself, you’re not likely to find any discounts any time soon. The Galaxy flagship tends not to get discounted until the release of the next model, which means you’re not likely to get significant savings on the S10 until around the beginning of 2020. If the S10 is a little pricey for your budget, then it’s definitely worth taking a look at the slightly older (but significantly cheaper) Galaxy S9 model.

The Samsung Galaxy S10 is a truly top end flagship phone, with some incredible specs. If you’re looking for great looks, great performance, and great features, then this could well be the phone for you. Yes, it costs a fair amount, but you’re definitely getting what you’re paying for here.

The arrival of a new Galaxy is always an exciting day, and we’ve been looking forward to the S10 for a while now. Fortunately, it doesn’t disappoint. Yes, it looks fantastic, yes, it’s super fast, yes, it’s got an amazing screen. It fulfils all our wishes and then some. We especially love that triple lens rear camera. If you’re a demanding shopper, then one of the best phones of the year is here, and you’re going to love the S10.