Get started shopping for pay monthly deals on the top end iPhone X with Tiger<obiles.com. A huge new high-definition screen, an enormous amount of power, great cameras, and a whole new design ethic, make this one of the most wished for mobiles around. Want to get your hands on one? Then just check out our awesome iPhone X deals below. 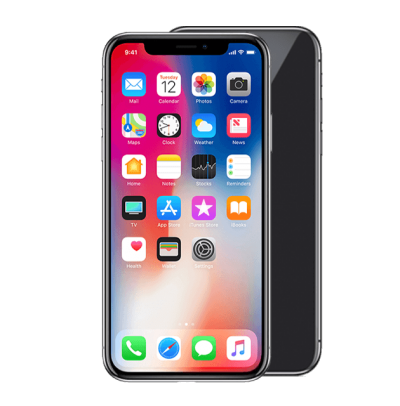 About the iPhone X

Apple promised us something special for the manufacturer’s tenth anniversary, and they’ve finally delivered with the iPhone X. Though iPhones have long been top sellers, some might argue that one iPhone is very much like another. All of that changes with the iPhone X. New interface, new look, new specs, the X marks a whole new direction for Apple in the shape of a seriously impressive mobile device.

Why should you want one? That almost bezel-less display can more than compete with top end Samsungs, those cameras are second to none, there’s tons of power, and plenty of extra features too. Yes, you’re going to be paying a hefty price, but you’re getting the best that Apple has to offer, and the iPhone X is an amazing phone.

You could be forgiven for thinking that this isn’t really an iPhone at all. Yes, you get the familiar slim profile and sleek curves, but there’s no physical home button and that front screen takes up nearly the entire front panel. This is a glass build too, unlike the older aluminium build iPhones. The X feels premium and sturdy in the hand, but it also looks the part, that lack of bezel giving it a true futuristic appeal.

A phone isn’t just about looks, of course, and the X gives you plenty of power and RAM to play with. But it’s that all screen front panel that’s going to be the real selling point, sharp, bright and beautiful. There’s some stellar cameras too, as well as a bunch of extra special features.

Though this is a pricey device, you can’t fault Apple for what they actually deliver. The iPhone X is second to none, and is by far the best iOS device around, and one of the best top end phone releases of the year.

Performance on the iPhone X

At these prices we’re expecting a lot when it comes to performance, but the X truly delivers. We’re talking hexa core processing, 3 GB of RAM, and the new Apple A11 Bionic chip set. All of that gives you not only lightening fast speeds and great multi tasking abilities, but also fantastic responsiveness, making for top performance.

Yes, this is Apple, so it’s an iOS device, and you’re getting iOS11 out of the box. New features abound here, including a smarter Siri, a new file management app, and far better storage management as well. And of course you’re getting more security and more stability with an up to date operating system.

If you’re looking for performance then the X is the way to go. No matter how demanding a user you are, the X can do all that you want and more. There’s no lag, no freezing, and speeds are unbelievable.

Let’s talk about that amazing display. There’s no home button here, practically the entire front of the phone is display (with a small lip at the top for the camera). You’re getting a massive 5.8 inches of space here, so more than enough for typing, reading and video watching, though one handed use isn’t really an option.

Resolution wise you’re getting 1125 x 2436 pixels, working out to around 458 PPI, which isn’t bad. More impressively though, this is a true Super AMOLED screen (a first for Apple), so not only are you getting crisp, clean lines, but you’re also getting true colour reproduction as well.

We expect an iPhone to have a nice display, but Apple really knock it out of the park with the iPhone X. This is by far the greatest screen that Apple have ever come up with, and it’s a true joy to look at.

A great smart phone wouldn’t be complete without a great camera set, and the iPhone X delivers in spades when it comes to photography. At the front you’re getting a 7 MP, f/2.2 aperture cam, which is pretty nice just for FaceTiming and selfies.

Around at the back you’re looking at a dual camera, you’re getting both an f/1.8 and an f/2.4 aperture lens here, making this the best camera Apple has ever made. You get tons of features too, including quad LED dual tone flash, 2x optical zoom, phase detection autofocus, simultaneous picture and video recording, HDR and everything else you’d expect to see.

When it comes to photography the iPhone X is absolutely brilliant. Crisp, beautiful, bright photos with excellent detail mean that even the pros are going to be satisfied here.

Obviously you’re getting a lot of extra features here, but there are a few that need special mention. The first is the new user interface. Yes, the X is as intuitive to use as ever, and also quite familiar, but since there’s no home button here you’re also getting a new way of interacting with an upward sweep that brings you back to the home button. This means a bit of a learning curve for those used to the old iOS.

There’s no fingerprint scanner here, instead you’re getting face ID to unlock (and to use Apple Pay), which is a big new change. Plus, the X is waterproof as well, an IP67 rating meaning that the X is good in water up to a metre deep for up to half an hour.

There’s wireless charging, which is good news if you hate cable clutter. You’ll also get fast charge tech (50% charge in thirty minutes), though you’ll need to purchase a special extra cable to utilise this. The X is also fully set up to take advantage of Apple’s new Augmented Reality software.

The iPhone X is the Apple flagship device, and what a phone it is. With loads of power, and incredible screen, a new design ethic, great cameras, and more special features than you’ll know what to do with, this is the greatest that Apple have to offer. If you want the best of the best, and you’re willing to pay the price, then the iPhone X is going to be an amazing buy.

You’re getting all the usual connectivity options here, with 3G, 4G, WiFi, and the new Bluetooth 5.0 version. There are two iPhone X options, one with 64 GB of internal storage, the other with 256 GB. Choose carefully, however, since there’s no SD card slot, so there’s no adding extra memory.

Alright, so is there anything that we really don’t like? That’s a tough question. We’d love an SD card slot, but Apple never include them, so that’s really a pipe dream. That price tag is pretty hefty as well, but you are paying for the best. The truth is that we really love the iPhone X, and we think you will too. If you want an amazing and beautiful iOS phone, then you’re going to want to check out the iPhone X today!