Get started shopping for great deals on the iPhone SE at TigerMobiles.com. Apple's budget device has tons of power and classic styling, all in an easy to handle, smaller package. Think you're ready for a phone this great? Then just check out our awesome deals on the iPhone SE in all storage sizes (16GB & 64GB) and colour options (Gold, Rose Gold, Silver, & Space Grey) below. 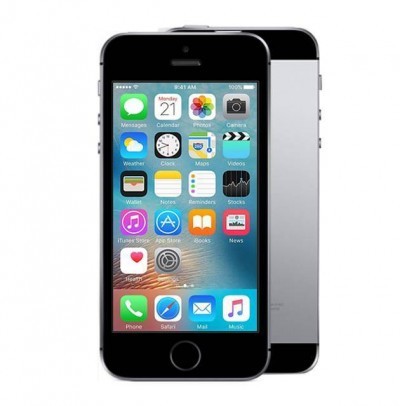 About the iPhone SE

Since the release of the very first iPhone, Apple has dominated the smartphone market. iPhones are stylish, powerful, cool, and expensive too. But this year the manufacturer have treated us to something a little different, a new mid-range hand set called the iPhone SE. Packed full of features, the SE is also very affordable. Is Apple about to take over the mid-range market as well as the top end? They could well be.

Why should you want the iPhone SE? There’s plenty of power under the hood with top end processors; there’s an excellent rear camera, there’s classic Apple styling and lots of battery juice too. Plus, you’ll save around £250 off the price of a top-end iPhone. What’s not to love about that? The iPhone SE is a great little device.

Key Features on the iPhone SE

If you owned an iPhone 5, then the SE is going to look very familiar to you, since it uses the same metal chassis. Other than that, the SE is classic Apple, with slim, sleek lines and rounded corners. The metal feels solid and firm in hand, and the device fits securely in the palm. This phone can’t be mistaken for anything other than an Apple product.

While it is good looking, the SE doesn’t disappoint under the hood, with some excellent internal specs. There’s awesome processing power and a top end Apple chipset, a fantastic rear camera, and an all new improved battery as well. All this means performance is excellent.

There are plenty of mid-range phones around, but the SE goes a step further. Yes, it’s got the cool factor, but it’s also got some surprisingly top end specs. If you’re looking for a phone that isn’t going to break the bank, then the iPhone SE is definitely worth your consideration.

Just how good is that performance? Well, Apple tends to be pretty secretive about complete power specs, but it looks like the SE is running a dual-core 1.8 GHz processor along with the new Apple A9 chipset. Add 2 GB of RAM to that mix and you’re getting great speeds and a device that’s incredibly responsive.

Obviously since this is an iPhone you’re running iOS, and in this case, you’re getting the new iOS 9.3 out of the box. You’ll get the familiar, intuitive interface that you know and love alongside added security and stability, plus some subtle tweaks to native apps. Siri, Apple’s voice assistant, gives more proactive advice, for example.

The actual spec numbers can be a little misleading on Apple devices, since iPhones are hard to compare to Androids, for instance. But the bottom line here is that the SE is fast, responsive, and can do anything you need it to do without lag, and that’s what’s actually important.

The iPhone SE is affordable, and the display is where certain compromises have been made, though you are still getting a decent screen. You’re getting four inches of real estate, which is smaller than you might expect, but still, leaves plenty of room for on-screen typing. Plus, that smaller display means that the SE is very portable, and can be easily slipped into a pocket or bag.

You’re not getting HD resolution; the SE comes in with 640 x 1136 pixels, which is about 326 PPI. However, the picture is crisp and clear, and colour reproduction is good. Partially this is because you’re getting an LED-backlit LCD, which also brings IPS to the table for excellent viewing angles.

No, this isn’t the greatest screen around, but it’s more than good enough, especially at this price point. From gaming to video watching you should be more than satisfied with the screen on the SE for regular purposes.

We have,to be honest and say that the front camera on the SE is a bit of a disappointment. It’s only a 1.2 MP cam, which isn’t terribly high resolution. For the odd selfie and for video calling it should be fine, though. Besides, the main event is on the back.

At the rear, the SE features a full, top end 12 MP camera with tonnes of great features. You’ll get phase detection autofocus, 4K video recording, HDR, and a dual tone LED flash for more natural looking lighting. And the SE is also capable of recording 4K video and taking 8 MP pictures simultaneously, so you get both options.

That front cam is a compromise, but the rear camera is excellent, on par with cameras on top end iPhones. Couple the great camera with easy to use and intuitive software and you’ll never take a bad picture again!

There are a couple of other things that we need to talk about with the SE, aside from the above. First up, you will be getting a fingerprint scanner. This means that you get added security, but also that you can use various online payment services. You’ll get NFC as well, so you can use Apple Pay, Apple’s digital wallet.

But it’s the battery that’s the big change. iPhones traditionally get terrible battery life, but the SE is the exception. It sports a large 1624 mAh Li-Po battery, giving you more than enough power to make it through a regular day. We’re talking about 240 hours of standby, around 14 hours of talk time, and about 50 hours of music playback here.

There’s a reason that iPhones dominate the mobile market, they get good performance and they look fantastic. And with the iPhone SE there’s finally a mid range, affordable option. You’ll be getting great performance, solid internal specs, and a phone that looks fabulous, what more could you want? For mid range shoppers, the SE is a great deal.

When it comes to connectivity you’re getting the usual: 4G, 3G, WiFi, and Bluetooth. You’ll have 16 GB of built in internal storage, but since this is Apple there’s no SD card slot, meaning no chance of adding more memory. You will get a cloud account from Apple, however, which should help with any storage issues.

So, was there anything we didn’t like? Well, we’d like a better front camera, and we’d certainly like a higher resolution screen, but if these are the compromises we have to make for that low price tag, then we’re okay with them. On the whole, the iPhone SE is a great little device. It’s got good performance, all tied up in a neat little package. If you’re mid range phone shopping, then you’ll definitely want to check out the iPhone SE!