Compare the best deals on the all new Apple iPhone 7 with TigerMobiles.com. The combination of great speed and performance and legendary Apple styling, with brand new features like improved audio and water resistance, make this one of the must-have phones of the year. Want to get your hands on one? The start shopping with our deals on the iPhone 7 below. 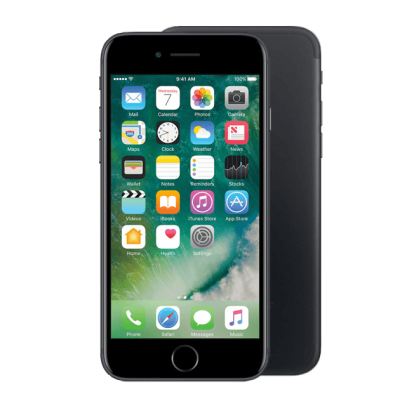 Trendsetters and phone lovers alike have always loved Apple products, but just how much of that premium price is paid simply for the brand name? Since the release of the first iPhone, Apple have rarely been truly innovative. But the iPhone 7 changes all that, with a combination of traditional Apple style and some excellent new specs. The performance the phone that’s set to be the best device of the year, and one that Appledoesn’tneeds right now.

Why should you want to get your hands on one? Well, obviously you’re going to get solid performance specs, and great design as well. But you’re also getting a water-resistant device with better battery life and excellent sound quality, plus there are some very nice cameras as well. It’s hard not to love a phone that’s this good.

Key Features on the iPhone 7

From the first look, this is unmistakably an iPhone. The build is unibody glass and metal, so it’s light weight and yet stays sturdy in hand. The lines are sexy and sleek, the corners curved and the profile slim line. But there’s a larger camera bump, making the phone sit better in the hand, and the physical home button no longer clicks, it vibrates since it’s now a haptic feedback pad.

Under the much-improved cover, you’ll find some impressive specs. There’s a new chipset, so speeds are faster, some nice new camera features, and much improved sound and audio quality. has a water resistant device too, a first for Apple.

The iPhone 7 does come with a hefty price tag attached, but for many this will be a worthwhile investment. Whether you’re an Apple fan or you just want a phone that’s going to give you top end performance, this is the device that you’ve been looking for.

Apple have released two seven models, and the 7 Plus is a phablet, therefore, gets the larger screen. This is the regular 7 model and sports a 4.7-inch display. However, typing is autofocus comfortable, and the small size means one handed use is easy and that the handset slides nicely into most pockets, so portability is no issue.

Screen resolution isn’t as great as we’d hoped for, and this isn’t a real HD screen, with only 750 x 1334 pixels (around 326 PPI). This leads to an image that lacks a little sharpness, but that’s more than made up for by the excellent colour reproduction. The LED backlit LCD screen creates deep blacks and bright whites, and IPS adds fantastic viewing angles.

There are better screens on the market, but the display here is maybe better than the numbers would have you believe. Particularly when looking at photos, this display is colourful and natural, something lacking in many higher resolution screens.

Performance here is also excellent, as even hardcore users will appreciate. Apple don’t release exact processor specs, but we’re probably getting quad core processing. What you’re definitely getting is 2 GB of RAM and the new A10 Fusion chipset. This means that the iPhone 7 is very responsive to user input and very speedy.

As you’d expect, this is an iOS device, running the newest version (iOS10) out of the box. This gives you better lock screen notifications, the ability to wake your phone by simply picking it up, and more speed and stability. The user interface has been cleaned up and simplified too, with menus appearing less crowded.

Whether you’re a casual or high-end user you’ll appreciate the speed and responsiveness of the iPhone 7. This phone will do anything you ask of it, and never show a hint of lag.

If, like most of us, you love taking pictures with your phone, then rest assured that the iPhone 7 is more than capable of supporting your needs. The 7 MP front facing camera is higher resolution than we’d expect to see, and has automatic face detection and HDR.

At the rear of the phone is a 12 MP device not much different from the camera seen on the 6S iPhone. But the addition of quad LED flash means that low light condition photos are clearer and better than ever. You’ll get phase detection autofocus, HDR, panorama modes and all the usual features, and you can record 4K video and take 8 MP photos simultaneously.

The bottom line is that the iPhone 7 takes fantastic pictures, bright and clear even in low light conditions. If you’re a budding photographer, this is going to be a great phone choice for you.

And the Special Features…

As a flagship, the iPhone 7 comes with far more special features than we have room to mention, but there are some important ones. Firstly, this is a water resistant phone with an IP67 rating (lightning in water up to a metre in depth for up to thirty minutes). There are dual external speakers, instead of the more regular single speaker, for real stereo sound. And there’s a bigger battery on board as well, offering up to 14 hours of 3G use per charge.

The iPhone 7 does lack a traditional 3.5 mm headphone jack, though Apply supply an adaptor if you want to use your current headphones. There’s also the option of buying Apple’s wireless ear buds. Otherwise, headphones plug into the lightening port, which transfers data faster and therefore gives better sound quality. This does mean that you can’t plug in your charger if you’re listening through headphones, though!

If you’re looking for a premium end phone, then the iPhone 7 is going to be a fantastic choice. There’s great performance, beautiful styling, and all kinds of handset features from water resistance to better audio quality.

Connectivity is the usual: Bluetooth, WiFi, 3G, and 4G, though the iPhone 7 supports more LTE bands than the 6S did. There’s 32 GB of internal, built-in storage, which isn’t a lot, and you can’t add more external storage since there’s no SD card slot. However, you will have access to an iCloud account for online storage should you need it.

Do we have any complaints? No big ones. We’d prefer a higher resolution screen, but the display is pretty good despite what the numbers say. The haptic feedback button takes a little getting used to, though. But this is a really great little handset and one that most people are going to love. If you want a fantastic phone and don’t mind paying a little extra for it, then the iPhone 7 is going to be a brilliant choice!