Check out great deals on the new iPhone 6S with TigerMobiles.com. Available in Gold, Silver and Space Grey with 16GB, 64GB or 128GB of storage. With new screen tech, a faster than ever processor and fantastic camera upgrades, this is the best iPhone yet, and it's stunning too. Think you can handle the power? Then get started by browsing our great deals on the iPhone 6S below. 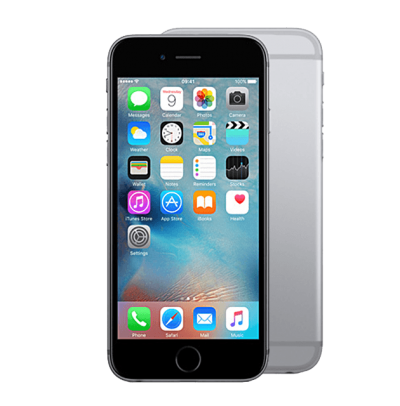 About the iPhone 6S

Apple has taken to giving us a brand new model every two years, and then an S model on the off year. And, to be honest, those S models aren’t especially worth the upgrade. But the new iPhone 6S is set to change that. For once we’re getting decent system updates, and a fair bit of new tech as well. Apple has been on top of their game for a long time now, and the 6S goes to show that there’s no sign of them slipping anytime soon. Why should you want to upgrade? That exciting new 3D touchscreen tech, for one. But then there’s also the best set of cameras that we’ve seen on an iPhone so far. Plus, a power upgrade as well. If you’re already an Apple fan, the 6S is more than worth upgrading to, and if you’re not, this could be the phone that lures you away from Android.

Key Features on the iPhone 6S

Yes, iPhones are very similar in looks, and the 6S is no exception. You see the same glass and metal styling that you saw on the original 6, but with a little extra thickness (probably to accommodate the new screen tech that we’ll get to in a moment). But with thin edges, sharp lines and a sleek profile the 6S feels top quality and fits snugly in hand. Legendary Apple styling hasn’t been lost, this is one good looking mobile. Looks aside, you’re getting some substantial upgrades. There’s that 3D touch screen tech, a new 12 MP camera, and a host of little things that just make life with the 6S easier and more pleasant. Performance is the best yet and added little features just make the mix sweeter. The iPhone 6S is an off year model, but for once it’s a very decent upgrade and one that’s well worth considering. If you’re looking for the best iPhone yet, then this is certainly it, and that combination of the familiar and the new means that the 6S is going to be high on most people’s shopping lists this year.

Obviously, you’re going to be looking for performance first, and the 6S is very snappy. Apple is notoriously secretive with numbers, and it’s unfair to compare an iPhone with things like an octo core processor on a Galaxy since those numbers simply don’t compare with Apple. What we do know is that the 6S has the new A9 chipset, and that it appears to be running 2 GB of RAM. In practice, the 6S is noticeably faster than the 6, particularly when you’re opening apps, for example. This is an Apple product, so of course, it’s running iOS. In this case, you’re getting the new iOS9 system which is as intuitive as always, but that has a few new tricks up its sleeve. Low power mode is going to be an excellent addition for most people, and the addition of a “back to previous app” button is a nice touch too. Regarding performance, it can be difficult to judge an iPhone by the numbers, and Apple rarely gives away numbers anyway. What matters though is practical use, and the iPhone 6S is faster, more responsive and has more features than the iPhone 6, and that’s what really counts.

The display on the 6S is going to be a big selling point. It’s a 4.7-inch screen, which is smaller than a lot of other flagship phones, but also means that the 6S is more portable than most. On-screen, typing is comfortable, though, and then there’s that new 3D touch. What this does is to allow you to press the screen (which Apple call “peek”) to get a preview of something, and then press harder (“pop”) to open the app or another menu, depending on what’s appropriate. It feels a little weird at first, but it works quite well and adds just another level of use for that touch screen. Again, numbers can be confusing when discussing Apple products. The screen has 750 x 1334 pixels, giving around 326 PPI. However, it is a LED backlit LCD screen with IPS tech. What does all that mean? It means that resolution numbers are kind of meaningless. The display on the 6S is beautifully sharp and clear, and colour reproduction is amazing. This is by far one of the best displays we’ve seen. Yes, the screen is smaller than some, but the truth is that the display on the iPhone 6S is one of the best on shelves, and it’s a true pleasure to look at, no matter what you’re doing.

There have been some pretty sweet camera upgrades on the 6S as well. Up front, you’re now getting a 5 MP camera, which includes a “screen flash.” This lights the screen of your phone as your taking a picture acting in the same way as a traditional camera flash would. At the rear, you’re now getting a 12 MP camera, which doesn’t sound like much but is a big step up from the old 8 MP cam on the iPhone 6. And it takes beautiful pictures, with 4608 x 2592 resolution, dual LED flash, phase detection autofocus, 4K video recording and a whole long list of other features. If you’re looking to take great pictures, then this is the iPhone for you. That increase in megapixels combined with the dual flash just mean that photos from the 6S are better than ever before, and even serious photographers are going to be impressed here.

There are a couple of other things that deserve a mention here. One of those is the new “Live Photo” option on the camera, which is very cool. When you switch the mode on you, get your regular photo, but you also get a short video that begins 1.5 seconds before the picture and ends 1.5 seconds after the picture, giving you, essentially, a living, moving version of your moment. You’re also getting an improved version of Siri, Apple’s digital assistant, who is now capable of answering more complex questions or completing more complicated tasks. For example, you can now ask her to “find pictures of me from last summer,” rather than just “find pictures of me.” Alongside this, you’re getting the expected fingerprint scanner, and the Apple Pay digital wallet payment system as well.

This is by far the best iPhone we’ve seen from Apple, and the 6S is more than just a bigger brother to the original 6 version. The 6S is a new phone in its own right, and that new screen tech combined with a faster than ever performance, and excellent new camera upgrades mean that the iPhone 6S is going to be a hit with even the most demanding user.

Connectivity wise you’ll get the expected Bluetooth and WiFi, and 3G and 4G as well. And, as usual, there is no SD card slot here, which means no expandable memory at all. However, there is 16 GB of internal memory here (bigger internal memory versions are also available), which should be enough for most people, particularly if you’re using the iCloud service for storage online.

Okay, time for complaints. And… we don’t really have any. Yes, we’d like expandable storage options, but that’s just not going to happen with Apple. Other than that, this is an amazing device. It’s fast, stylish, sexy and has everything we wanted to see in a new iPhone, so what more could we ask for? If you’re looking for the top phone of the year, then the iPhone 6S is going to be very, very hard to beat.