Compare the best deals on the iPhone 11 with TigerMobiles.com. Just because this is the smallest of Apple's 2019 releases doesn't mean that you're not getting plenty of bang for your buck. Tons of power, a great screen and a fab camera set means that this could be the phone that you've been looking for. Check out our great deals on the iPhone 11 below. 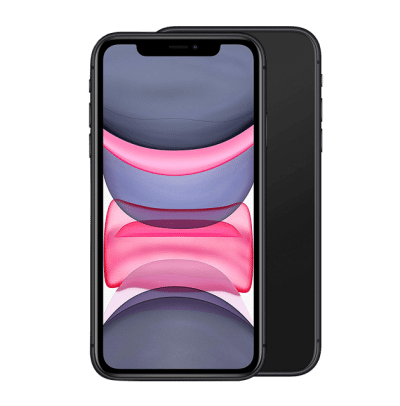 Every autumn there’s a ton of hype and excitement as Apple releases their latest iPhone models. In 2019 we’re getting the 11 series, and the basic iPhone 11 model is the cheapest version. But is it really an upgrade from last year’s model? The specs say yes, and the price tag here is definitely going to be a selling point for most Apple fans.

Why should you want the iPhone 11? There are all the usual reasons: loads of power, a great screen, fab cameras, and lots of nifty extras. This is one of the best iPhones out there, and the more affordable price (though it’s still not cheap) means that a new iPhone is more accessible than ever.

Key Features on the iPhone 11

This is unmistakably an iPhone. With sleek edges and rounded corners, only Apple could have designed the 11. Its glass and aluminium build keeps the 11 nice and light, and hand feel is as premium as ever. It’s not a small phone by any means, and one-handed use is uncomfortable, but it’s certainly a looker.

Under the hood, you’re looking at great power specs. There’s plenty of RAM, a high-end liquid retina display, a fantastic camera set, and all the bells and whistles that Apple generally stock their mobiles with. All meaning that the iPhone 11 isn’t just about looks.

Alright, this isn’t the cheapest phone around. It is the cheapest iPhone though, and the most affordable model we’ve seen from Apple for some time. And you’re definitely getting your money’s worth. The iPhone 11 is a brilliant mobile.

Let’s start with performance specs since we all want a phone that runs well. With the 11 you’re getting Hexa core processing (made up of a dual-core 2.65 GHz processor and a quad-core 1.8 GHz processor), the brand new Apple A13 Bionic chipset, and 4 GB of RAM. This adds up to lightning-fast speeds and great responsiveness.

With a new iPhone generation comes a new operating system version, and the 11 runs Apple’s new iOS 13. This gives you the stability, security and speed of an up to date operating system, as well as some nice new features. You’ll have access to a dark mode now, to save your eyes, as well as a revamped photo app, a new voice choice for Siri, street-level views for Apple Maps, and a ton of other tweaks.

We expect great performance from iPhones, and the 11 is no outlier. You’re going to be getting speeds faster than you can probably use, and the 11 is responsive enough that there’s never any waiting around or sign of lag. Bottom line? The 11 is a monster when it comes to performance.

You’re getting a huge 6.1-inch display here, giving you plenty of room for typing and viewing. The 11 is a large phone though, so using it one-handed or slipping it into a pocket isn’t necessarily comfortable. And you will notice that there is a fair amount of bezel around the display, in contrast with many other top-end models that prefer the screen to cover the whole front panel, so this could be a deal-breaker for some.

Resolution wise you’re getting 828 x 1792 pixels, so around 326 PPI, which isn’t fabulous when compared to similarly priced phones. However, this is an Apple Retina display, meaning that resolution numbers can be a little misleading. In reality, you’re getting a clear, sharp picture with true colour resolution, whatever those numbers might say.

Again, we expect great screens from Apple, and the 11 really doesn’t disappoint. Though that bezelling might be a deal-breaker for some shoppers looking for a more modern look, the display itself is a pleasure to look at.

Moving on to the camera set, and you’re getting some impressive specs here. At the front, you have a dual-lens selfie cam, made up of two 12 MP lenses, both f/2.2. That’s a 3D capable camera as well. So you’re going to be more than well equipped for selfies and video calling.

Around at the rear, you’re getting another dual-lens camera, again both 12 MP. One lens is f/1.8, 26 mm, the other is f/2.4, 13 mm. You’re getting optical image stabilisation, phase detection autofocus, quad-LED dual-tone flash, as well as all the normal camera extras like HDR, panorama modes and the like.

Long story short (and techie terms aside), this camera set is excellent. The iPhone 11 takes amazing pictures, in bright sun or in low light. No matter how good a photographer you are, you’re going to love the cameras on the iPhone 11.

All iPhones come with a bunch of extra features, and we can’t mention all of them. But there are some things that you should know. The iPhone 11 is IP68 certified, meaning that it’s dustproof and waterproof in up to two metres of water for up to 30 minutes, handy if you’re not always as careful with your phone as you should be.

You get great security with fingerprint sensors as well as Apple’s face recognition unlock. And you get solid financial security with Apple Pay meaning you can use your credit cards without worrying about getting your data stolen.

In terms of battery life, the iPhone 11 does pretty well. There’s a 3046 mAh battery onboard which should be more than enough to get through the workday (though heavy users might need a recharge before a night out). The 11 had QI wireless charging, as well as fast charge tech to give you a 50% charge in just 30 minutes.

The iPhone 11 comes in a range of colours, with the typical white and black choices, as well as green, yellow, purple, and red. You get the choice of 64 GB, 128 GB, or 256 GB of internal memory. But there’s no microSD card slot here, so you won’t be adding any extra memory.

Time for the key discussion: finances. How much exactly is the iPhone 11 liable to cost you? First up, this is a big name phone, so you’re going to be able to find it with pretty much any operator that sells phones, as well as in any major shopping chain. If you’re looking at SIM-free, then prices start at £729 for the 64 GB version, going up to £779 for the 128 GB or £879 for the 256 GB. On contract, you’re looking at paying around £35 a month with an upfront cost of about £49, though those prices vary by operator and depending on which memory model you choose.

If you’re contract shopping for the iPhone 11 there are a couple of things you should be looking for. Paying a larger upfront payment will mean lower monthly payments, so it’s always a good idea to put up as much money as you can initially. Secondly, do look for big data plans. The 11 is a fast phone and you’re likely to be using a lot of data (though you can get away with a smaller plan if you’re regularly connected to WiFi).

In terms of getting savings, we rarely see the latest iPhones being discounted. You’re not likely to see savings on the 11 until close to the end of 2020 when the next generation of iPhones will be released. If the 11 is a little expensive for you, you might want to consider opting for one of last year’s 10 models. You’ll still get a fantastic iPhone, but you might save yourself a little cash in the process.

The iPhone 11 is a great mobile, there’s no doubt about it. You get solid specs, awesome performance, and some nice extras too. Yes, the price tag is lower than on most of Apple’s models, but the 11 is still a bit of an investment. But if you’re willing to pay the price, then you’re going to get a fantastic phone.

We’re always excited to get our hands on a new iPhone, and the 11 doesn’t disappoint. It’s got great styling, a fantastic screen, and loads of power, but those things are expected from Apple. What we particularly love is the camera set, which is almost as good as the 11 Pro flagship phone, and of course the price. For once Apple has a truly affordable higher-end model, and that’s something to celebrate. If you’re looking for all the pros of an iPhone without the huge price tag, then the iPhone 11 could be the mobile for you.