Get started shopping now for the iPhone 11 Pro with mobile.com. The Pro name should give it away, this is a seriously high end device. If you're looking for tons of power, great cameras, loads of extras, and a fantastic screen, then this could be the phone for you. Just check out our awesome deals below! 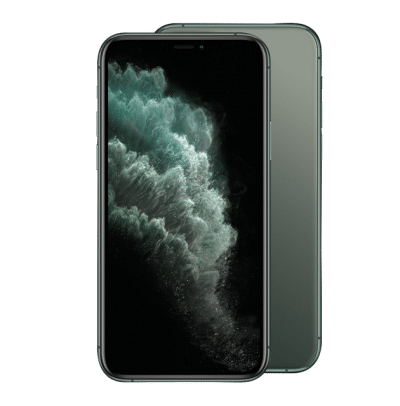 About the iPhone 11 Pro

Each year we get the excitement of a new line up of Apple’s iPhones, and the latest flagship is the iPhone 11 Pro. Sure, it’s an amazing phone, but do we really need yet another iPhone? Truthfully, the specs here say yes. The 11 Pro has a lot to offer, including some new features that are real crowd-pleasers.

Why should you be dying to get your hands on the iPhone 11 Pro? There are the obvious suspects, the styling is fantastic, there is loads of power, and great cameras as well as a fantastic display. But it’s the whole package that’s the real selling point, the fastest and best iPhone yet.

Key Features on the iPhone 11 Pro

At first glance, this could only be an iPhone. You’re getting sleek edges and rounded corners, and Apple’s legendary styling. There is a glass and aluminium build that not only keeps the weight down, but that also ensures that the 11 Pro feels premium and solid in the hand.

Looks aside, you’re getting some hefty specs. There’s loads of power and RAM meaning awesome performance, there’s a bright Retina display, there’s a stunning camera set. All in all, the 11 Pro is a monster of a mobile, and one that delivers in all respects.

Okay, so you’re going to be spending a fair amount of money here. But iPhones don’t come cheap, and with the kind of specs you’re getting here, you’re certainly going to be getting your money’s worth out of the 11 Pro.

The Performance and Power Specs

Performance is always key in a high-end phone, and the 11 Pro isn’t going to let you down. You’re looking at Hexa core processing power here, made up of a hefty dual-core 2.65 GHz processor alongside a quad-core 1.8 GHz model. Add in Apple’s newest A13 Bionic chipset and a solid 4 GB of RAM and you’re looking at top of the line performance.

Obviously, the 11 Pro is running iOS, and you’re getting the newest iOS 13 out of the box. This gives you the stability and security of an up to date operating system, as well as a little more speed. You’re also getting some nice new features, like a dark mode, a new voice for Siri, street views in Apple Maps, and even a remodelled photo app.

You’ll be hearing no complaints from us when it comes to the performance here. The iPhone 11 Pro is the fastest, most responsive iPhone yet, and even demanding users will be more than satisfied with speeds and responsiveness.

The 11 Pro features a 5.8-inch display, which is a great compromise. There’s more than enough room for typing and viewing, and yet the 11 Pro still fits comfortably in your pocket. However, there is one possible deal-breaker: unlike many other top-end phones the 11 Pro still features a fair amount of bezel around the display, which might put off those looking for a more modern look.

In terms of resolution you’re getting a massive 1125 x 2436 pixels, so about 458 PPI. And this display is an Apple Super Retina XDR OLED screen, so you’re getting top of the line tech. In layman’s terms, the 11 Pro gets a crisp, sharp picture with an accurate colour resolution and great viewing angles.

We expect a lot from Apple displays, and the 11 Pro really illustrates what Apple can do in terms of screens. It’s a pleasure to behold, whether you’re watching HD video, scanning through your pictures, or even gaming.

And onto the camera set, which again isn’t going to disappoint. The front features a dual-lens cam, made up of two 12 MP, f/2.2 lenses. It’s not only capable of HDR, but it’s also a 3D camera. This means you’re going to be taking excellent selfies, and video calling will be a breeze.

Moving around to the rear and you’ll find a triple-lens cam, made up of three 12 MP lenses. For the more technically inclined you’re getting an f/1.8, 26 mm wide lens; an f/2.0, 52 mm telephoto lens; and an f/2.4, 13 mm, ultrawide lens. Plus you get all the usual additions, like quad-LED dual-tone flash, optical image stabilisation, phase detection autofocus, HDR, etc.

The bottom line here is this is the best camera set we’ve seen from Apple yet. Whether you’re an amateur or a pro, you’re going to be getting clear, bright pictures, from action shots to portraits, from full sun to low light.

Obviously, there are loads of extra features packed into the 11 Pro and we can’t get to all of them, but there are some things that you should know before buying. The first is that the 11 Pro does have an IP68 certification, so it’s dustproof and waterproof in depths of up to two metres for up to 30 minutes.

Security is top of the line, with fingerprint sensors as well as Apple’s signature facial recognition tech. And you’ll get Apple Pay, meaning you can use your credit cards online with the comfort of extra security there.

Like most modern iPhones, the 11 Pro does NOT have a headphone jack, which could be a deal-breaker. It does get solid battery life though, with a 3190 mAh battery that should be enough to get you through the day. You get QI wireless charging too, as well as fast charge that will give you a 50% charge in just thirty minutes.

The iPhone 11 Pro comes in several colours: space grey, silver, gold, and midnight green. You also have the choice of different internal memory models, with a 64 GB, a 128 GB, and a 256 GB version. Larger memory versions are more expensive, but be aware that there’s no SD card slot, so you can’t add additional storage.

We expect a lot of iPhones, and every year, Apple delivers. The newest flagship, the iPhone 11 Pro, has so much to offer that we really don’t know what we like best. From tons of power to a magnificent screen and the best camera set we’ve ever seen from Apple, the 11 Pro is a powerhouse of a mobile. If you’re an Apple fan you’re going to fall in love with the 11 Pro, just like we have.