Compare the latest deals on the Huawei P30 with our easy to use comparison service. The latest generation flagship from Huawei has tons of selling points. With awesome power, a fantastic screen, and one of the best camera sets around, this is a real show-stopper. Think this could be the new phone for you? Then just check out our fantastic deals on the Huawei P30 below. 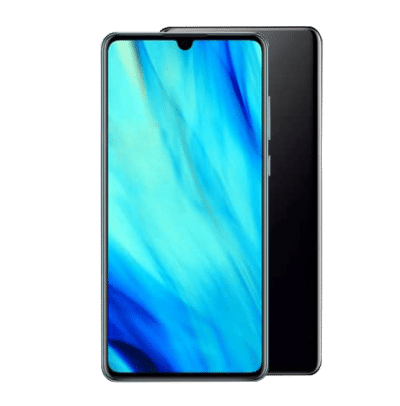 About the Huawei P30

Chinese company Huawei made a name for themselves by providing big spec phones for low prices. Only recently have they entered the flagship phone market. Still though, Huawei flagship might offer the big specs we want on a flagship, but they don’t break the bank. With their latest flagship offering, the P30, Huawei are going up against the big boys with a phone that costs a solid couple of hundred less than their closest competitor. Are there sacrifices to be made? Not really..

Why should you want the P30? There are the obvious suspects, lots of power, a large screen, great display specs, and decent battery life, along with a slew of special features. But it’s the camera set that’s the real selling point here. The P30 isn’t as pricey as some, but it’s not exactly cheap either. You are definitely getting your money’s worth though.

Key Features on the Huawei P30

The P30 is all screen, there’s no bezel here, other than a tiny notch at the top where the front cam is hidden. There are smooth corners and sleek lines, making the P30 look elegant and sophisticated. And that glass and metal built give the P30 a quality feel, though it is a little heavier than some flagships at 165 grams.

Looks aside, you’re getting some very nice internals indeed. There’s loads of power and RAM, a big, bright OLED display, and some nice extra features thrown in. Plus, there’s that triple lens rear camera set, which is the main feature on the P30.

You’re going to be spending a few hundred pounds here, as opposed to a thousand or so on a top end Samsung or iPhone, but you’re not exactly making big compromises. The P30 is a great all-round package, and one that should please even demanding users.

Performance is the first thing we look at on any phone, and we expect big things from a flagship. Fortunately, the P30 doesn’t disappoint. You’re getting octa core processing here (with dual core 2.6 GHz, 1.92 GHz, and 1.8 GHz processor running simultaneously), as well as 6 GB or 8 GB of RAM, depending on which memory model you go for. Either way, the P30 is lightening fast and extremely responsive.

This is an Android phone, as we expect from Huawei. And you’ll be running the newest Android 9.0 Pie right out of the box. This gives added security, stability, and speed, as well as some new features. The new gesture control system is a great addition, and the more rounded, sleeker look of icons is a definite improvement.

All in all, performance is second to none. We’d actually say that the P30 is probably more power than most people will ever need. You’ll definitely never experience lag here, no matter what you’re doing, because the P30 is a real work horse.

Big phones need big displays, and the P30 certainly gets one of those. You get a 6.1 inch screen, which is more than enough room to comfortably type, read, and watch videos on. It is a little big to use one handed though, and the P30 doesn’t slide easily into the pocket.

In terms of resolution you’re getting full HD with 1080 x 2340 pixels (around 422 PPI) on a 19.5:9 ratio display. It’s an OLED display too, so it’s nice and bright. Crisp, clear, with true colour reproduction, and great viewing angles, there’s nothing more we could ask for here.

To be fair, there are higher resolution screens around, though you’re unlikely to notice any difference unless you hold a high res phone next to the P30. In truth, the P30 is a pleasure to look at, and everything from high end games to HD video look absolutely great.

And now the P30’s main selling point: the camera set. Up at the front there’s a massive 32 MP (f/2.0) front camera. Selfies, video calling, even regular mobile photography all look fantastic on this, one of the best front cameras on shelves right now.

In short, there’s very little better than the P30 when it comes to photography. From quick snaps to full on portraits, pictures taken on the P30 are absolutely stunning, you won’t be disappointed here.

As a flagship device, the P30 is loaded down with extra features, but we do need to mention just a few of them. Firstly, this is an IP 53 certified device, so it’s splashproof and dustproof as well. Handy if you’re not always careful with your phone.

There’s an under display fingerprint sensor, so all you need to do is press your finger to the screen to get access. This gives you added security, as well as the option to add digital payment systems to your phone that require fingerprint locking. Oh, and there’s a headphone jack too.

You get a large 3650 mAh battery on board, which should be more than enough to get you through the day. There’s no wireless charging on this model, however. Though you do get a fast charger included that Huawei says can get a 70% charge in just 30 minutes.

There are a ton of colour options on the P30, with aurora, amber sunrise, breathing crystal, black, and pearl white options. Huawei do list three memory version, a 64 GB, a 128 GB, and a 256 GB version. However, currently, only the 128 GB is available in the UK. You do get an SD card slot, however, so you can add up to 256 GB of extra storage.

Right, the bottom line, how much is this going to cost you? Huawei flagships have become increasingly popular, so you should be able to get the P30 with any operator, and at most high street stores. If you’re looking to go SIM free, then the P30 is going to cost you about £699, so cheaper than most big name flagships. On contract, then you’re looking at prices around £40 a month, with up front costs from about £9.99.

As with all high end, 4G phones the most important thing you’re looking for in a contract is a big data limit. You’re likely to eat through data pretty fast, although if you’re constantly around a WiFi signal then you may save a little by opting for a smaller data limit. Currently, many P30 deals are offering a free gift (most commonly a SONOS speaker) with your order, so that’s something you might want to look out for.

In terms of discounts and savings, don’t expect much. This is a new release, so we’re not expecting to see discounts or sales until much later in the year. Prices on the P30 are unlikely to be discounted before fourth quarter 2019. If the P30 is a little rich for your blood, then consider going for the Huawei P20 instead. Last year’s model still gets good specs, and you’ll save yourself some cash.

The Huawei P30 is a beautiful phone that gets top end specs and an amazing camera set. If you’re in the market for a fantastic device with loads of power, a great screen, and incredible cameras, then this could be the phone for you. And compared to the prices of many top end phones, the P30 is really a bargain!

We’ve been big fans of Huawei’s flagship phones for a couple of years now, and their latest, the P30 doesn’t disappoint. It’s got the big, bright screen that we’ve come to love, tons of power, and it’s good looking too. But it’s the cameras that are really blowing our minds. That triple lens read cam is just brilliant, and we don’t think we can go back to a regular dual lens ever again. If you love mobile photography, then you’re going to love the Huawei P30.