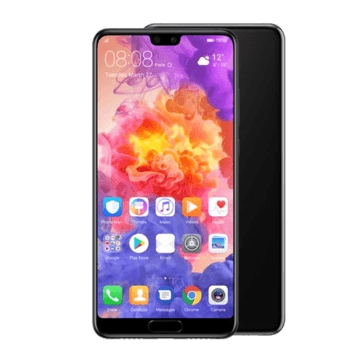 About the Huawei P20

Huawei have made a name for themselves for producing great specs at lower than expected prices. Last year’s P10 model was a solid contender for upper mid-range phone of the year, but the manufacturer have really upped their game with the new P20 model. But is there really room on the flagship market for yet another model? At these prices, Huawei are hoping to capture a market niche that’s looking for flagship phones but doesn’t want to pay flagship prices.

Why should you want the P20? It really does tick all the boxes. There’s a fantastic camera set, there’s loads of power, there’s a solid big screen, and there’s even a huge battery thrown into the deal. The real question should be why wouldn’t you want one? If you love powerful phones but don’t have the budget for the likes of an iPhone or Galaxy, then the P20 is going to be just right for you.

Key Features on the Huawei P20

The P20 is a seriously good looking phone. It’s slim, sharp, and comes in a series of graded colours that make this look like a luxury mobile. A metal build with a hardened glass finish keeps the P20 light, though that glass is a little slippery (a case is a must). There’s the notch on the upper front screen, home to the front camera lens and familiar to iPhone fans. And the P20 feels quite comfortable in the hand, despite its large size.

Design aside, the P20 has a lot to offer under the hood. There’s a triple camera set that’s one of the best around, there’s loads of power, there’s a huge battery, and some nice extra features too. In short, everything that you’d expect from a flagship phone.

But you won’t be paying serious flagship prices with the P20, which is going to be a big draw for many. The P20 offers you the kind of top-end mobile that you’re looking for without breaking the bank, and that has to be a selling point.

So, performance is key in any new mobile phone, and the P20 isn’t going to let you down. You’re getting octo core processing, with a quad-core 2.4 GHz and a quad-core 1.8 GHz processor running side by side, as well as an impressive 4 GB of RAM. This means that the P20 is lightning fast and very responsive.

This is an Android device, and you’ll be running Android 8.1 Oreo out of the box. This version of the OS will give you the security and stability of an up to date version, alongside some nice new features like better notification management.

In terms of power and performance, there’s really no quibbling here. The P20 is fast, responsive, performs excellently, and is capable of handling anything you could want it to do and then more. Top marks!

Onward to that display, and you’re getting a very nice 5.8 inches of screen space here. That makes the P20 pretty close to being a phablet. You’ll have plenty of room for typing and viewing, but one-handed use isn’t terribly easy, and the P20 won’t fit into the pocket of your skinny jeans.

Resolution isn’t too bad either. You’re looking at 1080 x 2240, so about 429 PPI. The display is bright and sharp, and colour reproduction is excellent. Viewing angles are good given the included IPS tech, and you’re getting the new 18.7:9 screen ratio as well.

There are better screens out there, this isn’t a 4K display. However, the P20 is a pleasure to look at, and even HD video looks amazing. This display won’t disappoint.

The camera set on the P20 is a real selling point and one that’s going to please any mobile photographer. Starting at the front, you’re getting a full 24 MP, f/2.0 camera. That’s one of the highest specced front cams around, and perfect for everything from selfie-taking to video calling.

What else should you know about the P20? There are plenty of special features, but we should single a few out. There is a fingerprint sensor, though it’s front-mounted rather than rear mounted, so you get additional security.

Battery life is amazing. The P20 comes with a huge 3400 mAh battery, which should more than last you through the day. There is no wireless charging, though there is USB-C fast charging. You also won’t find a headphone jack on the P20, though that’s becoming fairly standard at the top end of the market.

Finally, if you’re a mobile gaming fan, the inclusion of the new Kirin 970 chipset means that the P20 is capable of handling even the most intense, hardcore top end games.

The Huawei P20 is a great flagship phone that won’t break the bank. You get tons of power, a solid screen, amazing cameras, and a fair few extras too. If you’re in the market for something top end that doesn’t cost the earth, then the Huawei P20 is going to be a clear choice.

In terms of connectivity, you get what you’d expect: WiFi, 3G, 4G, and Bluetooth. There’s a whopping 128 GB of internal storage, which should be more than enough for anyone. But there’s no SD card slot, so you can’t add any additional external storage.

So, anything that we didn’t like? The combination of specs and price make it difficult to complain here. We would prefer an SD card slot, but 128 GB of internal memory is huge. The P20 isn’t waterproof, a feature seen in most top end phones, which might be a dealbreaker for some. On the whole, though, we love the P20 and think that you will too. If you want a top of the line phone that isn’t going to make you bankrupt, then the Huawei P20 is an amazing choice.