Find a great deal on the Google Pixel 3XL with easy to use mobile phone comparison tool. The biggest addition to the Google phone family is an awesome phablet device. There’s tons of power here, some good screen specs, and one of the best mobile cameras around. Could this be the phone that you’ve been looking for? Then check out the fantastic deals on the Google Pixel 3XL below. 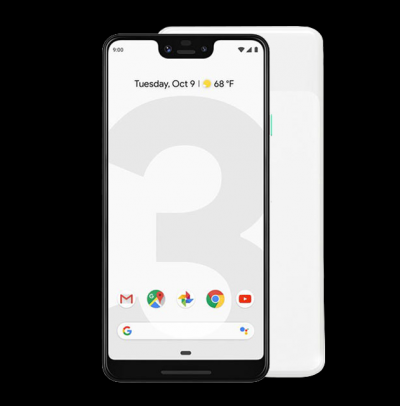 About the Google Pixel 3 XL

Google are still relatively new on the mobile market, but they already have a reputation for making some impressive devices. The Pixel phone line up is a pure Android set of smartphones and one that has proven to be very popular with shoppers. Given the high price point of Pixels though, is this mobile really worth your cash? The answer to that has to be a definite yes, this is a stunning phone and one of the best, and most innovative we’ve seen for a long time.

Why should you be dying to get your hands on one? All the boxes are ticked, there’s loads of power, decent screen specs, and some nice extra features. But then there’s that camera set, quite simply one of the best available. This is an awesome phone and one you really won’t regret buying.

The Pixel 3XL has a modern design format that should be familiar to most people. There are slim edges, sleek curves, and minimal bezels. And then there’s the new notch on the top of the screen as seen on iPhones. It’s a glass and aluminium build, so it’s nice and lightweight, but has a sturdy hand feel. This is no small phone, but it still manages to be lighter and smaller than that screen size would have you expect.

Aside from design credentials, the 3XL has a lot to offer. There’s lots of power, nice screen specs, and some very innovative new camera tech involved too. Plus there are some neat extras, like wireless charging.

You’re going to be spending a fair amount on the Pixel 3XL, but consider it money well spent. This is a true top-end Android phone and one that’s going to outperform most other mobiles out there.

Performance is key in a top end phone, and the Pixel 3XL isn’t going to let you down. There’s massive octo-core processing here, with a quad-core 2.5 GHz and a quad-core 1.6 GHz processor running side by side. Throw in 4 GB of RAM and you’ve got a phone that’s lightening faster and very responsive.

As a Google phone, it should be no surprise that this is an Android phone. It’s also one of the first phone’s to feature the latest Android 9.0 Pie out of the box. This gives you additional security and stability, as well as new features like better battery use and more gesture input.

If you’re looking for a top performing phone, then you’ve found it. No matter what you want to do on the 3XL it’s going to be fast with no lag and no freezing. This is a real workhorse of a device.

And you’re going to be getting a very nice little display too, though little really isn’t an adjective we should be using here. The 3XL features a massive 6.3-inch screen, which is fantastic for viewing and typing. That does mean that this isn’t a phone to use one handed though, and it doesn’t exactly slip into your pocket easily.

There’s quad HD resolution too, with 1440 x 2960 pixels, so around 523 PPI. That gives the 3XL a sharp, crisp picture, and the addition of P-OLED screen material means that colour reproduction is bright and next to flawless. You do get an 18:9 aspect ration here, and the display is Gorilla Glass 5, so less chance of breakage.

This isn’t the best screen we’ve ever seen, but it’s up there. The Pixel 3 XL is a pleasure to look at, whether you’re watching HD video, playing high-end games, or just surfing the web.

It’s a little difficult to explain just how good the cameras are on the 3XL. Firstly, you can’t just look at numbers alone, though at the front those spec numbers are pretty good. The front-facing cam is a dual lens affair made up of two 8 MP lenses (a f/1.8 aperture, and a f/2.2). That means great selfies and awesome video calling.

At the rear, you might be disappointed to see only a single lens 12 MP camera. But wait up. Firstly, this is a f/1.8 aperture, 28mm, 1/2.55’’ lens with optical image stabilisation and dual tone LED flash. Secondly, where this camera really wins out is the fact that it not only has a dedication camera chip but also Google’s photo AI. In essence, this camera can do anything a basic DSLR cam can do and more, all without needing to change lenses.

If all that tech speak was a little too much for you then the bottom line is that this is one of the best mobile cameras around. Shots are perfect, in low light or bright light, with great colour reproduction and crisp, clear focus.

There are tons of extra features on this, Google’s flagship phone, but some deserve singling out. Firstly, with its IP 68 rating, the Pixel 3XL is dustproof as well as waterproof in up to 1.5 metres of water for up to thirty minutes.

You’re going to be getting good sound quality too, thanks to dual front-facing speakers which give a good base and solid treble. But there’s no headphone jack here, so you’ll need to get an adaptor or just go wireless.

Battery capacity is good, thanks to a huge 3430 mAh battery. But you also get not only quick charge tech, but also wireless charging as well. You don’t get face ID here, which could be a deal breaker, but there is a rear mounted fingerprint sensor for additional security.

The Pixel 3 XL comes in three colour variants, black, white and pink. There are also two internal storage versions, one with 64 GB of space, the other with 128 GB. Do be aware though that there’s no SD card slot, so you can’t add additional external storage.

So, on to the financials, and the Pixel 3XL isn’t a cheap phone. It’s going to be a popular model, which means you should be able to find it with most operators (with plenty of contract choices) and in most shops. SIM-free you’re looking at paying about £869 for the 64 GB version, and £969 for the 128 GB version. On contract, prices are starting at about £65 monthly, including service, with upfront charges running from zero.

If you’re shopping for a 3XL contract then data really needs to be your main concern. Look for a 4G contract since the 3XL will give you faster mobile data over 4G. And look for large data packages to avoid hefty extra charges. If you regularly use WiFi though, you could save a little by getting a smaller data limit.

For those shopping SIM-free the news isn’t good. Google really don’t discount their products often, and it’s not likely that you’re going to find a deal on the 3XL any time soon. We may see some discounts in mid-2019 if a new Pixel is announced then. The best way of getting savings is to simply opt for the slightly older Pixel 2XL model paired with a SIM only plan, which is still a very good top end phone and could save you a couple of hundred pounds.

Phablets are big phones, and the Pixel 3XL is amongst the biggest. It packs in plenty of power, as well as a great screen and one of the best mobile cameras we’ve ever seen. It’s not going to come cheap, but the 3XL is really worth paying for if you’re looking for a true top-end Android.

We love Android phones, and a Google phone is as close to pure Android as you can get. The latest Pixel 3XL is a great addition to the Google line up, and we’re loving it. There’s plenty of power, a decent screen, and one of the best mobile camera sets that we’ve ever seen. There’s even wireless charging. True, this is a bit of a tech geek’s device, but it’s a brilliant phone and one that we really can’t get enough of.