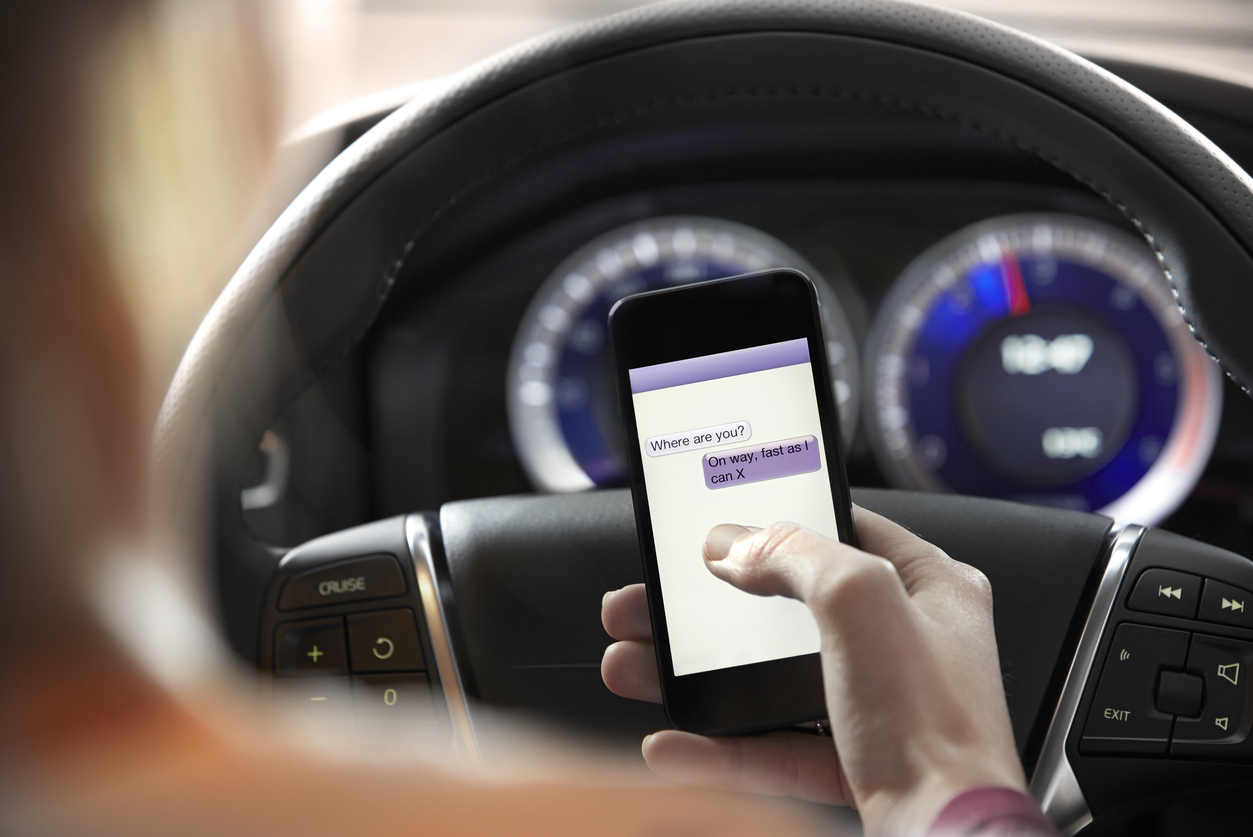 Mobile phones are a constant in most of our lives. But there’s one place where you certainly shouldn’t be calling, texting, Tweeting or anything else: your car. In the past, we’ve all seen campaigns against drink driving, campaigns that have proven successful given the lower rates of driving under the influence caused accidents. Is it about time we do the same for mobile phone use while driving? In recent years, mobile use has become a huge road safety issue, and we’re taking a look at just why it’s so dangerous, and what can be done to help solve this problem.

Mobile Use in the UK

In a country of around 65 million people, there are around 83 million mobile phones in use. Rather obviously, that’s more than one per person. There are also around 38 million vehicles registered for use on UK roads. In some cases, this is a killer combination. Mobile phone use contributes not just to car accidents, but also to deaths and life-changing injuries. Since 2003 it has been illegal in the UK to use a mobile whilst driving. Unfortunately, this hasn’t stopped some people…

How many accidents are caused by texting and driving in the UK?

According to the latest 2018 Report on Motoring, released by the RAC, there has been no change in the number of motorists using mobiles behind the wheel in the last twelve months. A full 25% of drivers admit that they have used their phones whilst driving at some point in the last year. 25% of people admit to making or receiving a call when behind the wheel, 39% admit to making or receiving a call whilst the car is stopped but the engine is running. 19% of drivers have checked texts, emails or social media when driving (40% have done so with the stationery but with the engine running). 16% have actually posted on social media or sent texts or emails whilst driving (33% with the car idling). And 14% of drivers have taken photos whilst driving (22% with the car idling).

These numbers are huge and have changed very little since the 2017 Report on Motoring, which is a worrying trend. UK statistics are somewhat difficult to get, but there are plenty of worldwide stats around. In the US the National Safety Council estimates that cell phone use contributes to 1.6 million crashes per year and that 25% of accidents are caused by texting and driving, with texting being 6 times more likely to cause an accident than drunk driving. In India, 2,100 people were killed during 2016 due to mobile use whilst driving. Australian authorities estimate that 9% of fatal crashes are caused by distracted drivers, including mobile users. Irish authorities believe that mobile use whilst driving is causing more accidents than drink driving. And the World Health Organisation estimates that mobile use makes accidents four times more likely.

So what are the real consequences of using a mobile whilst driving your car?

Road Accidents and Mobile Use When Driving

It’s difficult to get accurate numbers on exactly how many crashes and injuries have occurred due to mobile phone use. Many non-fatal injuries aren’t reported to police, and getting a country-wide overview of accident statistics from the many UK police forces is tough. Plus, of course, many drivers will not admit to using a mobile when an accident occurred.

However, according to the UK Department of Transport’s 2017 Annual Report on Reported Road Casualties, there were 1793 traffic fatalities in 2017 and 170,993 injuries due to road traffic collisions. Of these, mobile phone use was found to be a contributory factor in 33 of fatalities, 90 serious injuries, and 308 less serious injuries. This does not include pedestrians, and these numbers are based on 93,125 accidents.

As mentioned above, these numbers are probably not reflective of the truth of the matter, since many accidents due to mobile use go unreported. Nevertheless, there some shocking statistics globally.

Whilst the problem is huge in the UK, these numbers from worldwide sources make an even scarier read:

Texting While Driving Is:

But Isn’t it Illegal?

Yes, using a phone in a vehicle is illegal in the UK. The Highway Code forbids the use of mobile phones in all vehicles. You can use your phone whilst your car is parked with the engine switched off, or to call 999 or 112 in an emergency if there is no way of safely stopping. You can also use your phone via a Bluetooth headset, or with voice activation, if the phone is mounted on your dashboard (though it must not block your view of traffic). You can NOT use your phone whilst stopped at traffic lights, or whilst stuck in traffic.

The penalties for being caught driving whilst using your phone are severe. An infraction results in a £200 fine and 6 points on your licence. If you have had your licence for two years or less you will be banned from driving. If you decide to take the matter to court then the possible consequences are a complete driving ban and a fine of up to £1000. Laws in the UK are stricter than in all other EU countries, with the exception of the Netherlands.

Police also have the option of charging you with other offences, including dangerous driving, driving without due care and attention, and not having proper control over a vehicle. Penalties for these offences vary but can be given in addition to the mobile phone use charge. Plus, you can still be charged for dangerous driving whilst using a hands-free set if the officer believes that you’re not driving carefully enough.

You should also be aware that the UK is one of only a few countries where police can access mobile phone records without a warrant. Many of the UK’s mobile operators give police mobile records when requested, including Vodafone, EE, and Three. These could, of course, be used as evidence in court.

Why Is It So Dangerous?

Using a mobile whilst driving is a distraction. And there’s science to prove it. Hundreds of research studies have taken place across the world, all of them, like this one, proving that using a mobile whilst in control of a car is dangerous. One study found that being on the phone increased your likelihood of an accident five times, a shocking number.

The US Department of Transportation found that drivers using phones were less likely to scan the road ahead for trouble, were more likely to weave between traffic lanes, and were slower to respond to hazards.

Driving and using your phone is just as much of a distraction as you would assume it is. Your reflexes are slower, and the chances of you being able to respond appropriately in the face of danger are much lower. Driving and phones do NOT mix…

What Are We Doing About the Problem?

With the rapidly growing number of mobile phones in our world, the risks of driving and phoning are only getting higher. So what’s being done to help resolve the issue? There are three main areas to look at here:

In 2017, thanks to pressure from lobby groups, the government strengthen the laws about driving and using a mobile phone, doubling the penalties for doing so. There is also a new kind of road sign that is beginning to appear in some areas. These smart signs detect mobile signals from cars and will light up if they sense a driver is using a phone, reminding the user that he’s breaking the law. The government are reportedly considering allowing technology that would block phone signals inside vehicles, though this has not been accepted yet. There are no further currently planned government strategies for combating mobile phone use while driving. However, some local police forces have their own campaigns and crackdowns.

Car manufacturers themselves are helping prevent the problems of driving and phoning by equipping cars with smart connections. These allow you to connect your phone to your in-car systems (generally the GPS system) and directly respond to calls and texts by “speaking” to your car whilst driving, rather than needing a bluetooth earpiece. This ability is becoming standard in luxury cars and is beginning to hit the mid-range car market too.

Unsurprisingly, mobile manufacturers are getting in on this market too. Both Android and Apple have versions of their operating system designed for cars. This gives you all the functionalities of a phone (and all your connected accounts and apps) specifically designed for your in-car display. The nice thing about both Android Auto and Apple CarPlay is that they can be retro-fitted to many existing vehicles.

What Can I Do?

The simplest thing that you can do is not use your phone when driving. If your mobile is too big of a temptation, then simply put it in the glove compartment or switch it off whilst you’re in the car. Be aware of other drivers as well, and be prepared to confiscate a phone if you’re in a vehicle with someone who insists on using their mobile whilst driving.

In terms of other motorists, is there anything you can do if you see another driver using their phone? If you see someone else who’s driving and phoning simultaneously then attempt to remember their number plate, the make, model and colour of their car, and pass this information along to police. Obviously, don’t call the police until you’re safely parked! Unfortunately, it’s unlikely that anything will be done unless the police find that the driver is still on the phone when he’s tracked down, but reporting it is better than doing nothing. The exception to this is if you have dash cam footage of the incident that the police can use as evidence to charge the other driver.

Mobiles and Driving: The Bottom Line

Mobile phones are great, and most of us have at least one. But they don’t belong in your car. There’s no reason to use a phone whilst behind the wheel, and the dangers speak for themselves. It only takes a moment of inattention to cause an accident, and at the end of the day, a text or phone call just isn’t worth the risk. There are technologies that will help you stay connected whilst in your car, and if you’re a real phone addict it might be a good idea to invest in these. Otherwise, put the phone away and drive. You can catch up with your emails, texts, and social media when you get to your destination.