Start comparing deals on the Samsung Galaxy S9+ with TigerMobiles.com. This top end phablet phone just ticks all the boxes. Loads of power, huge AMOLED screen, top of the line cameras, and plenty of special features thrown into the mix too. Think this could be the new mobile for you? Then check out our fantastic deals on the Samsung Galaxy S9+ below. 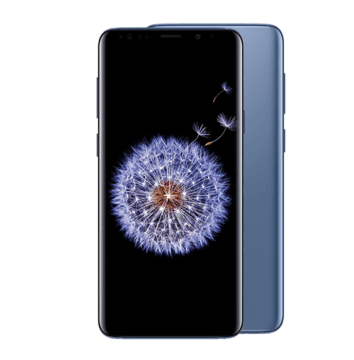 About the Samsung Galaxy S9+

Samsung are hands down one of the best mobile manufacturers around, and their best selling high-end Galaxy S series regularly brings us the best Android mobile of the year. And Samsung are hoping that the phablet S9+ is going to be just as popular as its older brother, the S8+. Is the world ready for yet another Samsung phablet? The S9+ packs just enough extra punch that the answer to that has to be yes.

What do you have to look forward to? Obviously, there’s tons of power, a huge Super AMOLED display, and elegant Samsung design. But there’s also a new camera set and plenty of extra features too. If you’re looking to buy the best mobile out there, then Samsung’s Galaxy S9+ has to come top of the list.

This is indisputably a Samsung phone. From its elegant curves to its slim lines, this could only be a Galaxy. The S9+ is glass and aluminium build, making it light and yet sturdy in the hand. And that fantastic display curves around the edges, leaving bezels just at the top and bottom. This is one stunning phone, and we’re not ashamed to say it.

Apart from good looks, the S9+ has plenty going on under the hood. There’s lots of power, more than you’d ever need, plenty of RAM, that massive AMOLED screen, and even a spectacular new camera set.

The S9+ doesn’t come cheap, but that price tag is more than warranted. This is quite simply one of the best Android phones that there is. If you’re looking for the best, then you’ve found it.

Performance and Power on the S9+

At these prices, you’re going to be wanting amazing performance, and fortunately, the S9+ delivers. You’re getting octa-core processing here (both a a quad-core 1.7 GHz and a quad-core 2.8 GHz processor) along with a massive 6 GB of RAM. Make no mistake, this phone is super fast.

As a Galaxy, this is an Android phone. You’ll be running the most up to date Android 8.0 Oreo out of the box. This gives you more speed and stability as well as some nice new features. Oreo gives you better notification management, as well as better split screen functions, for example.

When it comes to performance you’re going to find the S9+ very difficult to beat. It’s one of the fastest and most powerful mobiles around, and even the most demanding of users is going to love it.

This is a phablet, so you’d be expecting a large display here, and again, your expectations are met. A massive 6.2 inches of screen real estate with 18.5:9 ratio. That means tons of room for comfortable typing, brilliant video watching, or even gaming. However, you won’t be using the S9+ one-handed, that big screen means it’s not a small device.

In terms of resolution, you’re getting true HD with 1440 x 2960 pixels, giving you about 529 PPI. Pictures are clear and sharp and flawless. And, of course, this is a Samsung signature Super AMOLED display as well, meaning you get brilliant colour resolution.

Whether you’re into gaming, HD videos, picture editing, or just browsing the web, the display on the S9+ is absolutely beautiful. This is one of the best displays around, and it’s a true pleasure to look at.

You are getting quite simple some of the best cameras around here. Up at the front the S9+ sports an 8 MP (f/1.7 aperture, 25mm, 1/3.6’’ sensor) camera. That gets auto HDR and dual video calling as well. Not bad for a front cam.

Move around to the back though and you’ve got something truly special. A dual lens camera with dual aperture tech. That lets the rear camera act like an eye, contracting and expanding depending on light conditions and meaning that you get the perfect picture every single time. If you’re into camera tech then those specs are: 12 MP, f/1.5-2.4, 26 mm, 1/2.55’’ for the first lens and 12 MP, f/2.4, 52mm, 1/3.6’’ for the second lens.

You can add to that phase detection autofocus as well as 2x optical zoom and LED flash, along with all the other camera features you’d expect to see. All of this means that the S9+ has an absolutely amazing camera set, truly one of the greatest cameras that we’ve seen on a mobile. You’ll get great shots every time.

There are just too many special features for us to mention them all, but we do need to pick out a few things here. The S9+ gets AR emojis, meaning that you can take a selfie and have the camera animate you into an emoji which you can then dress and style. A nice touch, though maybe a little gimmicky for some.

But the camera does have another, maybe more useful addition, that of Bixby vision. Bixby, Samsung’s digital assistant, is integrated with the camera. This means that you can do things like point the cam at a sign in French and have Bixby translate it immediately into English.

When it comes to battery life a huge 3500 mAh battery should keep you going for most of the day. If it doesn’t, you have the option of wireless charging, as well as quick charge tech and a USB-C connector for faster-wired charging. And again, just like with the S8 model, we’re seeing an iris scanner and fingerprint scanner for additional security.

Make no mistake, this is a premium product and you’re going to be paying premium prices. The S9+ is going for around £869 SIM-free. But, since it’s likely to be one of the year’s most popular phones, you should be able to find it at pretty much any of the major UK networks. In terms of contract deals, you’re still going to be paying a fair amount. You’re looking at around £170 down, plus £50-£60 per month including service with most operators.

If you’re checking out deals on the S9+ one thing that you will want to keep in mind is the data package size. Whilst low data packages can be cheaper, with a phone like this you’re likely to use up that data limit pretty quickly. The S9+ does have 4G as well, so look out for deals that feature 4G data.

Looking for savings and discounts? You’re best bet here is going to be waiting for a month or so after release, since you’re not likely to find much discounting on a premium phone right around launch time. Contract prices are likely to drop if you can wait for a while. If that price is still a little steep for you, then it could be worth considering the slightly older S8+ model instead. Specs on the two phones are fairly similar and you could save yourself more than a hundred pounds.

Want the best that money can buy? Looking for a big screened phablet? Then the Samsung Galaxy S9+ is going to be a fantastic buy for you. With huge specs, a huge screen, and loads of features, this is an awesome mobile. And the good news is that since it’s an in-demand product you should find it with most UK operators, so you’ll have plenty of choices when it comes to contract plans.

The Samsung Galaxy S series is one of the best phone lines out there, and the S9+ is an amazing addition to the lineup. Yes, we love the power and the extra features and the new camera set. But mostly we love that bright, big screen, we just can’t get enough of Samsung’s Super AMOLED displays. In the market for the best that money can buy? Then you’re going to love the Galaxy S9+ just as much as we do!