Get started shopping for the top end Samsung Galaxy S8 with TigerMobiles.com. Packed full of power and plenty of features, alongside stunning looks and one of the best screens on the market, this is sure to be a big hit with demanding customers. Think you're ready to handle it? Then start by checking out our great deals on the Samsung Galaxy S8 below. 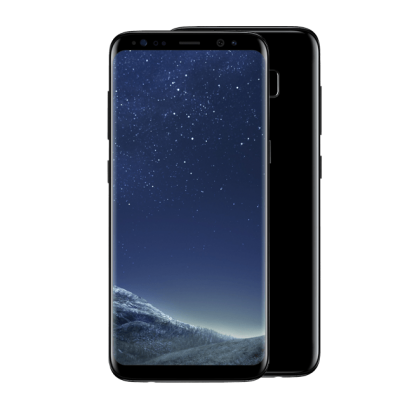 About the Galaxy S8

Samsung have been dominating the Android phone market for a while now, thanks to their flagship Galaxy S series. But after a tough year last year, and with Apple really upping their game with the new iPhones, the manufacturer really needs a flawless Galaxy release. Luckily, the Galaxy S8 is as close to perfect as an Android can get. It might be pricey, but you’re definitely getting what you’re paying for.

Why should you make the investment in the S8? Obviously, there’s plenty of power on board, as well as some decent cameras and tons of internal storage. But it’s that awesome display that’s the real selling point, and it’s a true pleasure to look at. In the market for a high end mobile? Then the Samsung Galaxy S8 is going to be right up your street.

This is indisputably a Samsung Galaxy phone. With its smooth, sleek edges, its rounded corners, it could be nothing else. But Samsung lovers will notice a couple of design differences. Firstly, the S8 has ditched the physical home button, all buttons are now haptic feedback screen icons. Secondly, the “infinity” display stretches far across the screen, making this phone almost bezel-less. It’s looker, but the S8 fits well in the hand too, and has a premium and robust feel.

Internally, you’re getting some good upgrades over last year’s model. There’s more power, better screen specs, more storage, though camera specs are fairly unchanged over the old S7. The S8 is waterproof, as are most of Samsung’s top end phones these days, and does feature wireless charging.

This is a high end device, and the price tag does reflect that. But the Galaxy S8 is also pretty close to flawless. With tons of power, great features, and a perfect display, this is the phone for a discerning buyer. Want the best when it comes to Android phones? Then this is the mobile you want.

Performance is always key, and we’re expecting a lot from a top end phone. Fortunately, the S8 delivers. There’s octo core processing power (a quad core 2.3 GHz processor and a quad core 1.7 GHz processor) running alongside a full 4 GB of RAM. That means the S8 is lightening fast and excellent at multi tasking, as well as being very, very responsive.

Obviously this is an Android phone. Out of the box you’ll be running Android 7.0 Nougat, the newest version. This means plenty of stability and lots of nice extra features (like multiple profiles). With a new Android version slated to be released soon, the S8 as a top end phone will likely be one of the first phones to get that update.

In terms of performance, we can’t fault the Galaxy S8. It’s fast, it’s powerful, we can’t complain. And for the regular user, the S8 probably has more power than you’ll ever need. Not that there’s anything wrong with having a little extra…

The display is going to be a big selling point here. This is an infinity display, which means limited bezels, so the screen covers nearly the whole area, and there are no physical buttons in the screen area. You’re getting a 5.8 inch display, which is more than enough room for easy typing and fantastic video watching. However, you’ll struggle to use the S8 with one hand.

There’s stunning resolution here. You’re getting 1440 x 2960 pixels, so around 570 PPI, making this one of the sharpest displays around. Of course, this is also a signature Samsung Super AMOLED display too. These two things combine to make a display that’s crisp and clear and that has amazing colour reproduction too.

Hands down, this is one of the best displays on the shelves right now. From high definition video watching to high end game playing the Galaxy S8 is sheer joy to behold.

There aren’t huge differences between the S8 camera set and the older S7 camera set. But since the older model had fantastic cameras, that really shouldn’t be a big deal. At the front you’re getting a full 8 MP cam with autofocus, which should be more than good enough for video calling and the like.

Moving around to the back you’re getting a 12 MP cam with f/1.7 aperture, 26 mm cam. That’s got all the usual suspects: LED flash, phase detection autofocus, HDR, panorama modes, touch focus, etc. You can also simultaneously record 4K video and take 9 MP images, giving you both a still and moving memento of the same event.

Is this the best camera set we’ve ever seen? No, but it’s close. And even pro photographers should be more than happy with the cameras on the S8, particularly since the included camera software offers plenty of customisation options. And the pics speak for themselves, you’ll get great shots, even in low light.

The S8 is packed full of features, and we really can’t mention them all, but we can highlight a few. There are plenty of security options, with a rear mounted fingerprint scanner, as well as a face scanner and iris scanner on board. The 3000 mAh battery should be more than enough to last a day, and when it’s drained, there’s wireless charging.

You’re getting an IP 68 certified phone, meaning that it’s dustproof and waterproof at depths of over a metre and a half for up to thirty minutes. You also have to possibility to use DeX, which allows you to connect your phone to an external display and use it like a desktop (you’ll need to buy the DeX port separately).

Finally, a new user interface is intuitive to use and includes a new Samsung digital assistant called Bixby, who can help you with anything phone related (finding pics or apps, answering questions, etc), and is fully voice activated.

The Samsung Galaxy S8 is a real top end phone. You get tons of power, lots of features, and one of the best displays on the market right now. You’ll be paying a pretty penny, but the S8 is more than worth its price tag. If you’re a demanding phone user, then the S8 isn’t going to let you down. Performance is great, looks are stunning, what’s not to love?

You’re getting the normal connectivity options: 3G, 4G, Bluetooth and WiFi. Internally, you’ve got a solid 64 GB of storage. However, there is also an SD card slot, so you can add up to 256 GB of extra storage space should you need it.

So, anything we didn’t like? There’s really only a couple of niggling things. We’d have liked a small camera upgrade, but to be honest, these cameras are pretty great. A slightly bigger battery would be nice too, particularly given that larger screen, but wireless charging at least makes charging easy and hassle free. On the whole, we love the S8, and we think you will too. If you want the best Android on the market, then you definitely need to check out the Samsung Galaxy S8!