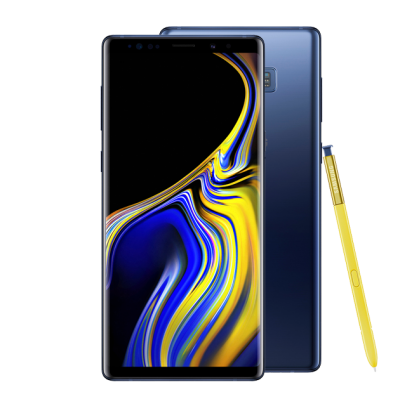 About the Samsung Galaxy Note 9

Samsung makes some of the best, and priciest, phones on the market. Coming a close second to Apple, the manufacturer are renowned for their top end mobiles. Of course, these phones get frequent updates, and the newest incarnation of the phablet Galaxy Note series is the Note 9. But is the upgrade really worth it, given that price tag? The answer to that has to be a resounding yes.

Why should you want a Note 9? Obviously, there’s tons of power, and there’s some decent cameras, as well as some great added extras. But it’s that big, bright screen that’s going to be the selling point here. Alright, you’ll be spending a pretty penny, but the Note 9 truly is worth the investment.

The Note 9 looks premium. The glass and aluminium build keeps the Note lightweight, but still sturdy in the hand. And the combination of smooth curves, slim profile, and that gorgeous Infinity display wrapping around the phone mean that this is one gorgeous device.

Aesthetics aside, the Note 9 gets some very impressive specs as well. There’s loads of power, a huge battery, and plenty of storage, alongside decent cameras and some nice new tricks. And of course, there’s that S pen, which has some new tricks all of its own.

This is one of the most expensive phones on the market, and it shows. It’s simply a top end product that is loaded with luxury and top of the line specs. If you’re a demanding shopper and you want the best, then the Note 9 is going to be for you.

Performance is obviously the most important factor in a top end smartphone, and these numbers are truly astounding. The Note 9 gets octo core processing power with a quad-core 2.7 GHz processor running alongside a quad-core 1.8 GHz model. On top of that there’s a whopping 8 GB of RAM on the 512 GB storage model (and a still impressive 6 GB on the 128 GB model). All this means that the Note 9 is stunningly fast.

Like all Samsungs nowadays, the Note 9 is an Android phone. You’ll be running Android 8.1 Oreo out of the box. This is the most current OS version, giving you more speeds and security (as well as better notification management and cool split screen ability). Samsungs are generally first in line when OS updates arrive too, so when Android 9 makes an appearance you should upgrade in no time.

The performance here is just flawless. This is one of the highest powered phones around, and no matter what you’re doing the Note 9 has the specs to deal with it. No lag, no freezing, just super fast, responsive performance.

And on to that display, which is a clear selling point. Firstly, this is an Infinity display, meaning it curves around the edges of the phone giving you more screen space. It’s also a massive 6.4 inches, so whilst you won’t be using the Note 9 one handed you do get plenty of room for typing and viewing. This is also an 18.5:9 aspect ratio phone, though that’s standard on most flagships nowadays.

In terms of resolution you’re getting 1440 x 2960, so around 516 PPI. That gives you a crisp, clear and well-defined image. And of course, this is a signature Samsung Super AMOLED display as well, so you’re also getting amazing colour reproduction with deep blacks and true whites.

Make no mistake, this is one of the best phone displays around, and it’s a true pleasure to look at. From HD video to photo editing, everything looks amazing on the Note 9.

Samsung do tend to make decent cameras, and the Note 9 is no exception. Having said this, the camera specs are probably the only specs on this phone that aren’t the absolute best on the market. That’s not to say that the cameras aren’t great though. At the front, you’re getting an 8 MP, f/1.7 aperture, 25 mm camera, which is fantastic for selfies and video calling.

The camera set on the Note 9 is excellent, though there are a couple of better camera phones around. But even pros will appreciate the specs here, and for the amateurs, you’ll get great shots every time.

There are tons of extra features on the Note 9, and we really can’t go into them all. But there are a few we need to mention. First up, this is a waterproof phone. The IP 68 rating means that it’s dustproof and waterproof in up to 1.5 metres of water for up to thirty minutes.

Next, there’s that new huge battery. The Note 9 sports a huge 4000 mAh battery on board, so you should definitely be able to get through the day without charging. However, when charging time does come around, you get fast charge tech, as well as wireless charging.

And on to that S pen. The Note 9 does come with a stylus, and the Bluetooth connected S pen has a few new tricks to make it even more useful. The S pen now works remotely, thanks to that Bluetooth connection. You can programme these function, but as default it allows you to do things like take a photo and change camera settings from up to 30 feet away. You can also play and pause music.

You do get a headphone jack here. Plus, there are the usual flagship security functions, like a rear-mounted fingerprint scanner, and an iris scanner as well.

Finally, there are two versions of the Note 9 available. One has a whopping 512 Gb of internal memory, the other has a still satisfying 128 GB. Both, however, include an SD card slot so you can add up to 512 GB of external memory should you need it.

This is a new flagship phone as of August 2018, and prices are really reflecting that. You should be able to find the Note 9 with nearly all UK operators that sell mobiles, but SIM free you’re looking at a huge £1000+ price tag (though the 128 GB model is a little cheaper at around £899). Contract deals are going to be pretty pricey as well. You’re looking at paying around £60 to £70 per month for the phone plus calling plan, with upfront fees going from around £20.

In terms of what you should be looking for, the Note 9 really does demand a big data plan. With fast 4G data speeds and tons of features and options, you’re going to want to know that you’re not going to break that data limit. There are already a few free gift deals around, though these mostly contain a Samsung wireless charging device and the like.

Since this is such a new model you really should expect to see any discounts or big deals on it just yet. We don’t really expect to see deals on the Note 9 until around the end of 2018, and possibly even the beginning of 2019. At that point, we’d expect to save maybe around £100 or so of the total price, though deals do change often so you’ll need to keep an eye on prices.

If you want the best of the best, then the Samsung Galaxy Note 9 could be the phone for you. It gets fantastic performance, decent cameras, an amazing screen, and some nice added features as well. Yes, you’ll be spending a fair amount, but then this is a top end phone. Don’t expect to see big savings on the Note 9 just yet, but you should be able to get your hands on one through most UK operators.

Samsung are the king of smartphones, and we expect a lot from a new release. Fortunately, the Note 9 delivers in spades. We love the huge display, truly one of the best on the market. And of course we’re digging the performance specs and extra features. And on top of all that, the Note 9 looks fantastic as well. This is as good as mobiles get right now, and if you’re a high end shopper then you’re going to love the Note 9 as much as we do. Perfection does come at a price, but in this case the price is more than worth paying.