Start shopping now for the OnePlus 6 with TigerMobiles.com. This phone has it all, tons of power, great cameras, a big screen, and premium design. We’re talking high-end specs here, but the price point is solidly mid-range. Think this could be the phone that you’ve been looking for? Then check out our great deals on the OnePlus 6 below! 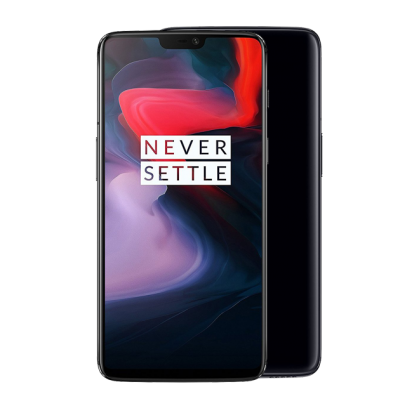 Chinese manufacturer OnePlus got off to a rocky start, using an invitation-only system of buying phones that made their handsets tough to get hold of. But they’ve now successfully expanded into more traditional markets and are beginning to get a reputation for producing big spec phones with lower than expected prices. Their current flagship is the OnePlus 6, a beast of a phone, but can it hold up against the likes of Apple and Samsung? You might be surprised…

Why should you be dying to get your hands on the OnePlus 6? Well, there’s plenty of power here, as well as a solid big screen and some decent cameras. But there’s also that lower than expected price point. If you’re looking for a flagship phone but don’t want to pay flagship prices, then the OnePlus 6 is going to be a great buying decision.

Key Features on the OnePlus 6

In looks, the OnePlus 6 is very reminiscent of the iPhone X. It’s got an all-glass design that feels premium in the hand, as well as that on-trend top of the screen notch. Bezels are minimal, the profile is slim, the curves sexy, meaning this is an all-around sexy phone. However, given the large screen size, the OnePlus 6 doesn’t exactly fit comfortably in the hand, and that glass can get slippery, so you’ll need to be careful.

Under the hood, we’re getting some very impressive internals. Plenty of power and RAM, of course, a large display, solid cameras, and a few nice little extra features that really serve to seal the deal. The OnePlus 6 isn’t just about sexy looks, after all.

The real surprise here though is the price. The OnePlus 6 costs far less than phones with very similar specs, making it a bit of a bargain for a flagship phone. If you’re shopping on a budget but don’t want to sacrifice performance for the price, then the OnePlus 6 is going to be a fantastic deal for you.

Obviously, power and performance are going to be big factors in any phone buying decision, and the OnePlus 6 really outdoes itself when it comes to the numbers. It’s running octo core processing power (a quad-core 2.8 GHz and a quad-core 1.7 GHz processor) alongside a massive 8 GB of RAM in the 256 or 128 GB model, or 6 GB in the 64 GB storage model. Long story short: the OnePlus 6 is lightning fast and super responsive.

This is an Android device. Out of the box you’ll be running the most up to date Android 8.1 Oreo OS version. This gives you speed, stability and security, as well as some nice new features. Split screen ability is vastly improved in Oreo, as is notification management.

If you’re looking for top of the line performance, then you’ve found it. There’s no lag here, even when multitasking. Everything from high CPU photo editing to high-end gaming is flawless on the OnePlus 6. Performance really is second to none.

Now we get to that screen, and it’s a big one. A full 6.28 inches to be precise. That’s a huge amount of room for typing, viewing and playing. However, do be aware that this really isn’t a phone for one-handed use, nor is it going to slide easily into a pocket. This is one big mobile.

Resolution wise you’re getting Full HD, so that’s 1080 x 2280 pixels or around 402 PPI. That’s not the highest resolution screen around, however, the picture is crisp and sharp with clear fine detail. And this is an AMOLED screen, so you’re getting fantastic colour reproduction with rich blacks and bright whites.

The bottom line is this is a big, beautiful display. For high-end gaming or HD video watching, the OnePlus 6 is an amazing choice, and it’s a true pleasure to look at.

Moving on to the camera set, and again, we’ve got very solid specs here. At the front, you’re looking at a full 16 MP camera (f/2.0, 25 mm, 1/3’’), which is fantastic for selfies and video calling and one of the biggest front cameras around.

No, this isn’t the greatest camera set on the market, but it’s very, very good, and as an all-round camera set it’s excellent. If you’re a big fan of mobile photography then the OnePlus 6 isn’t going to disappoint.

There aren’t a whole heap of extras here, but there are a few things that we should mention. There is 4G, obviously. There’s also a fingerprint sensor, so great security, as well as NFC, both of which will mean better access to online or digital payment systems.

The charging port is the newer USB-C standard, making for faster charging, and there is also Dash Charge tech on board. But you shouldn’t be charging too often, with a hefty 3300 mAh battery which gives decent battery life even given the large screen.

Whilst the OnePlus 6 doesn’t have an IP rating, OnePlus have said that they have improved water resistance and that the phone should be more than safe in daily water circumstances, like rain showers. And finally, there is a headphone jack here.

There are three colour variants  of the OnePlus 6: midnight black (matte), mirror black, and silk white. And there are three internal storage options: 64 GB, 128 GB, and 256 GB. However, the phone does not have an SD card slot, meaning you won’t be able to add any additional external storage.

OnePlus phones have never been quite as easy to get your hands on as they really should be. In fact, at the moment the only major operator offering contract deals on the OnePlus 6 is O2. However, this is likely to change, so it’s worth keeping an eye on other networks. On contract you’re looking at paying anywhere from £35 to £60 per month, depending on upfront payment, which model you choose, and phone plan, and upfront costs range from £10 to around £80. In terms of SIM-free and pairing it with a PAYG SIM you’re looking at paying from about £469 to around £569 again depending on the model you choose.

If you’re looking at contract options, you really only have the choice of O2 right now, so there’s not a lot of room for comparing prices. Do look for a contract that includes a decent data allowance, however, since you’re likely to be using a fair amount given 4G capability.

If you’re looking for discounts on SIM-free models, it’s a little early yet for that, since the OnePlus 6 is a relatively new release. We would expect more discounts to become available in autumn 2018, a few months after release date.

There are some excellent flagship phones around, and the OnePlus 6 is just one of them. The main difference here is that price, which really can’t be beaten. The OnePlus 6 offers up some serious top-end specs, but manages to do it on a mid-range budget, making this a great phone option for most customers.

It’s not often that a phone comes along that just completely blows us away, but the OnePlus 6 has done just that. This phone really does have it all. We’re talking tons of power, solid cameras, decent big screen, everything that we could ask for in a top end mobile. But the price is a fraction of what you’d pay for a flagship Apple or Samsung device. We’re totally in love with the OnePlus 6, and we think that you will be too.