Get started shopping for deals on the Nokia 3310 2017 with TigerMobiles.com. This classic dumbphone has a few tweaks to make it more modern but is essentially the traditional Nokia that you know and love. If you’re looking for a phone that has no internet connection, or a travel or festival phone, then this could be the hand set for you. Just check out our awesome deals on the Nokia 3310 2017 below. 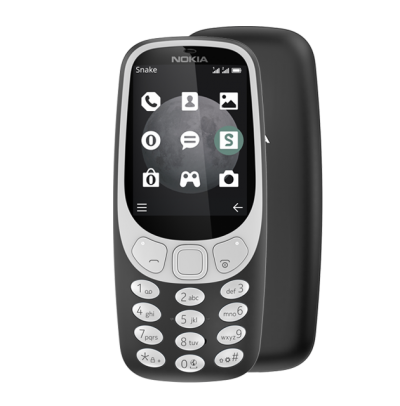 Nokia are hardly new on the mobile market, but they have been making something of a comeback. The classic Nokia 3310 was the manufacturer’s best-selling handset, with over 120 million of the original 3310s sold. Famed for being indestructible and getting incredible battery life, Nokia has decided that the world is once again ready for an updated 3310 2017 model. It’s certainly a risk in these days of high powered smartphones, but Nokia are betting that some of us would like a simpler life and a simpler phone.

Why should you want the 3310 2017? Well, there’s not much in the way of power, the display specs are pitiful, there’s no internet connection, and the cameras are dodgy at best. But that’s kind of the point. The 3310 makes calls and sends texts, there’s a couple of games, but that’s pretty much it. If you’re looking for the simplest phone around, then this is going to be the choice for you.

The Nokia 3310 2017 looks almost exactly like the original. It’s chunky, plastic, and fits firmly and securely in the hand. That plastic is close to indestructible by the way, and it feels very robust indeed. The corners are curved and the profile chubby, though Nokia have slimmed down the 2017 version a little and it’s slightly lighter than the original. There are a number keypad and a small display, as well as a central navigation button.

Under the hood, not a lot has changed. There is minimal processing power and limited internal storage. Though there’s a nice expandable storage upgrade in the new version. Cameras are basic, and there’s no 3G connectivity (let alone 4G).

This is indisputably a budget phone and a dumb phone at that. But that doesn’t mean that the 3310 is easily dismissed. Whether you’re looking for a phone for a child or an older user, or perhaps a secondary phone that can be used for travel or in the outdoors, or you just want a simpler life, the Nokia 3310 2017 is a fantastic choice.

We write a lot of these mobile reviews, and this is the section where we generally tell you about processing power, RAM, and operating system. However, all those topics are moot when it comes to the Nokia 3310.

There’s minimal processing power (barely enough to be measured in GHz), there’s next to no RAM, and there’s really no standard operating system at all. So talking about any of these things would be pointless. The fact is that the 3310 doesn’t need to worry about performance simply because it’s not expected to “perform” as such.

The 3310 makes calls and sends text messages. You can play a couple of simple, preloaded games. That’s all. But it does these things incredibly well. You’re not going to be downloading apps, you’re not going to be watching videos or surfing the web. The 3310 doesn’t need big performance specs. But if you’re looking for a phone that can handle the basics, then the 3310 isn’t going to let you down.

And… we run into similar problems with display specs. This is no touch screen phone, you’re going to be using the central navigation button to move around the screen. There’s no big resolution or fancy screen material. But since you’re not going to be watching video or playing anything but the preloaded games, these things really aren’t an issue.

You get a 2.4-inch display that gets 240 x 320 pixels. The screen sits on top of a numeric keypad and takes up less than half the front panel of the phone. It is a colour screen (unlike the classic 3310), but that’s really the only bow to modernity.

However, since you’re going to be doing little else other than sending text messages, the display is just fine. It’s large enough to see clearly and crisp enough that you won’t be mistaking letters in messages. It does the job, and that’s all that we ask.

Alrighty, the 3310 does have a camera, but not the kind of smartphone camera set that you might be used to seeing. For a start, there’s no front camera at all. That means no selfies and no video calling.

At the rear, there is a basic 2 MP camera. The original 3310 did not have a flash, but the new 2017 version does feature an LED flash. The camera will even shoot basic resolution video, though the quality is shaky at best. But there’s no bells and whistles, no panorama mode or autofocus or anything else.

The camera on the 3310 is basic, it’ll take a snap or two, but that’s pretty much it. This isn’t a camera designed to capture special moments, but it’s useful enough if you need a reminder of something.

There aren’t really any special features here as such, but that doesn’t mean that there aren’t a few things that we need to talk about. The 3310 does have a reputation for being indestructible. However, it’s not waterproof and has no official rating for sturdiness. Having said that, this is a phone that’s certainly more robust than your average smartphone, so dropping it a few times really isn’t going to be a problem.

And then there’s the battery life. Battery life on the 3310 is incredible. It gets around 720 hours of standby time, around 22 hours of talk time, and about 51 hours of music playing per charge cycle. So you’re not going to be charging your phone every day. When you do need to charge, there’s a micro USB charging port (unlike the classic version which had a proprietary Nokia port).

You’ll get a couple of games, including the famous Snake, and there’s a decent enough music player. But that’s pretty much your lot.

There are four versions of the 3310 available, in dark blue, red, yellow and grey. Internally you’re only getting 16 MB of memory, but since you only need to store contact numbers and a couple of low-resolution pictures that should be fine. However, there is an SD card slot and you can add up to 32 GB of external memory.

The good news here is that the Nokia 3310 is both very affordable and very available. If you’re looking to get the 3310 on contract then both Vodafone and EE do have options, though O2 and Three do not stock this model. Up front, price is generally £0, and monthly you should be looking at around £10 to £15 including a service plan. As for SIM-free, the 3310 goes for around £50 depending on where you shop.

If you are shopping for a contract don’t forget that the 3310 does not have full internet access. This means that you don’t need a data plan as part of your service contract, so don’t be tricked into paying for one! A simple calling minute and text message plan should do just fine.

In terms of SIM free discounts, again, there are plenty available. The 3310 has been sold for as little as £38, which given its already low price tag is quite the bargain. You’ll need to shop around, and traditional sales periods tend to be the best time to get discounts.

There are tons of dumb phones around to choose from, but few have the history or the retro value of the Nokia 3310 2017. No, it won’t check your emails or let you watch YouTube, but it will give you a simple phone that does its job well. The 3310 is definitely worth considering if you’re looking for something that’s not a ubiquitous smartphone.

Dumb phones have been making a come back, but no one is more excited than us to see the return of the classic Nokia 3310. Yes, it brings back memories of playing snake, and it’s as indestructible as ever (and still gets amazing battery life too). We love the 3310 for its simplicity, and because it makes the perfect choice for a handset for kids or a secondary mobile for travel or festivals. It’s a blast from the past, and we love it, and we think you will too!