Get started looking for offers for the new iPhone 6 in Gold, Silver or Space Grey at TigerMobiles.com. The iPhone 6 has sexy Apple design, oodles of new features and some serious upgrades as well. If you want an iPhone that can rock your world, it's got to be the iPhone 6. Take a look at some of the great deals on the iPhone 6 below. 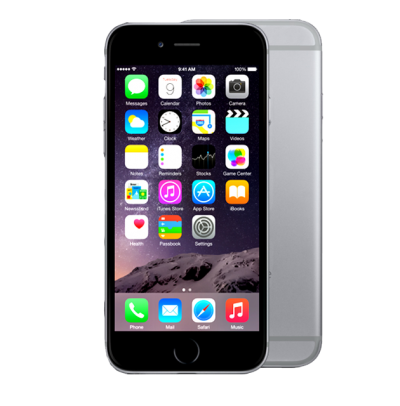 For a while now Apple have been releasing new iPhones every year, meaning that we weren’t always getting big enough spec upgrades to justify the price of a new model. But the iPhone 6 is a clear step up from the older iPhone 5S model, and is ready to compete at the top of the market, coming way closer to high end Android models than any other iPhone before it.

Why are we all excited about the iPhone 6? There are tonnes of reasons. That bigger, better screen is a clear winner for us, as well as the better battery life, new operating system and better camera features too. We love Apple’s new release and think that it is a wonderful upgrade. The 6 is bigger, better, faster and more beautiful than any other iPhone handset.

Gone are those hard, straight lines that we saw on the iPhone 5S. The iPhone 6 is gently curved, it’s thin, all-metal body feels just right in hand. That metal covering gives the iPhone 6 a real premium feel, and the sleek new design is comfortable and easy to hold onto, even if you’re using your phone one handed. Apple has really upped their (already high) design credentials with this model.

Go underneath all that though, and you’re going to be pleasantly surprised at the specs the iPhone 6 has to offer. It’s faster than the iPhone 5S, and the addition of a bigger screen and a whole host of new features mean that this is a genuine and worthy upgrade.

Combine all of these things and what are you getting? iPhones have always been big sellers, though as of late they’ve been losing market share. But the iPhone 6 is set to become one of the biggest phones of the year. This is a significant change for Apple, and after some lacklustre releases, the 6 is the best we’ve seen from the company for the last few years.

It’s Got the Power

Going under the metal skin, the iPhone 6 has a tonne more power than any other iPhone model so far. It’s tough to get real spec numbers out of Apple, but from benchmarks, the 6 is snappier, more responsive and way more powerful than the older 5S model. You’re looking at a dual-core 1.4 GHz CPU, plus 1 GB of RAM, and an Apple A8 chipset, all of which should be more than enough to keep you on your toes.

This is an iPhone, so obviously it’s running iOS, but the 6 has the newest iOS 8 incarnation, and it’s pretty sweet. There are plenty of new features thrown in, including a better native keyboard, music recognition ability for Siri, and new functionalities in SMS and email programmes to. If anything, iOS 8 is unbelievable even more intuitive than iOS 7.

If you’re looking for something with good, solid performance, the iPhone 6 is sure to satisfy. It’s not the most powerful phone on the market, but it is a workhorse. There’s going to be nothing to complain about here, and you’ll get decent performance with no hint of lagging.

By far the most significant change on the iPhone 6 is the fact that it has a decent sized screen. At 4.7 inches the iPhone 6 might not quite be competing against the five inch or more screens found on many Androids, but it is a excellent combination between a good viewing size and a display that can easily be used with just one hand.

The display itself is Apple’s high-class Retina HD, meaning you get almost perfect colour resolution plus far better viewing angles than on many AMOLED screens. The iPhone 6 gets a pixel resolution of 730 x 1334, and 326 PPI, so pictures are sharp and well defined. This screen is a joy to behold.

If you’re sick of compromising on a tiny screen just to get an iPhone, then the iPhone 6 is going to be a real bonus for you. That 4.7-inch screen just makes it so much easier to use (and type on) than older model iPhones. And this is probably our absolute favourite upgrade on the 6.

We’ve got to be honest with you and say that it is a little disappointing that Apple hasn’t added to the standard 8 MP camera that we’ve seen in the last three iPhone incarnations. But we do know that MP isn’t everything, and the iPhone 6 takes some fabulous pictures.

Part of the reason for this is that there’s been a sensor upgrade, which gives you far faster focus time. Plus, there’s the nice true tone dual flash that we first saw on the iPhone 5S, so you’re getting the natural colour even on photos taken in low light. Then there’s all the tricks that you’d expect: panorama, burst mode, digital image stabilisation, and better facial recognition. Apple has even thrown in HDR as default for the rear facing cam.

And up front? The front FaceTime camera gets HDR capability too, as well as better focus and face detection. Front or rear, you’re going to be taking some stunning photos with the iPhone 6.

iPhone 5S users have had a lot of complaints about battery life on their mobiles, but Apple has vastly improved this on the iPhone 6. This time the new iPhone is rated at up to eleven hours with WiFi, and up to ten hours with 4G or 3G. If you’re sick of charging your mobile more than once a day, then this is going to be great news for you.

You can’t have an upgrade without more speed, and the iPhone 6 isn’t going to disappoint. Not only do you now have the option of WiFi calling and VoLTE (voice over LTE), but you’re going to be getting faster connection speeds too. WiFi should be up to three times faster than traditional connections, and LTE (4G) is promising speeds up to 150 Mbps. That’s a pretty fast mobile internet connection.

You’re getting a new M8 co-processor as well, which is going to give you a little more speed than the older M7 model, as well as having an added barometer sensor. And the addition of NFC gives you just one more connectivity option, one that will be used for mobile payment systems in the future.

The iPhone 6 is a true masterpiece from Apple. Its bigger screen, increased power specs and all the bells and whistles you get from iOS mean that this iPhone  incarnation really stands a chance against the rapidly growing Android market.

As far as upgrades go, this is a great one. Most of the problems that consumers have had with the older iPhone 5S model have been solved, and Apple have given us a whole bunch of new fancy features too.

Any complaints? Well, we’re still stuck with static memory numbers, but with Apple that’s not going to change any time soon. We’d like a bit more camera resolution too, but to be fair the iPhone 6 takes some pretty amazing pictures as it is. For iPhone fans the iPhone 6 is a big step up, and one that’s sure to be both popular and profitable for Apple.