Start compare deals on the stunning Huawei P30 Pro with the Tiger Mobiles comparison tool. The biggest top end device from Huawei has tons of features. You get lightening fast performance, tons of power, a solid screen, and one of the best camera sets on shelves right now. Could this be the new phone you’ve been looking for? Check out our deals on the Huawei P30 below. 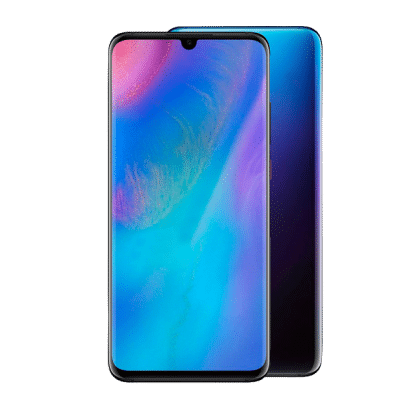 About the Huawei P30 Pro

Huawei is best known for making affordable phones with decent specs. However, they’ve recently entered the western flagship phone market, and are getting quite the reputation. Their top of the line current model is the P30 Pro, a massive, powerful device that they claim is fit to compete against the likes of the Samsung Galaxy and latest iPhone. Has Huawei bitten off more than they can chew? We don’t think so.

Why should you want to get your hands on the P30 Pro? Well, there’s lots of power, a big, bright screen, and some nice extras of course. But the main event here is the brilliant triple lens rear camera set. And better yet, the P30 Pro is cheaper than most big name flagships out there, so you’ll get savings too.

At first glance all you see is screen. There’s no bezel here, the display covers the entire front panel barring a tiny notch at the top centre that houses the front camera. The P30 Pro is all clean lines and smooth edges, giving it a premium look. And the metal and glass body gives it a premium feel too. But that metal body means that the P30 Pro is a little heavier than some flagships, weighing in at 165 grams.

Under the hood, you’re getting some incredible specs. There’s lots of power, obviously, as well as RAM, a big, high-quality screen, and a fair few extras. And then there’s that unbelievable triple lens camera set.

Sure, you’re going to be spending a fair amount here, though not as much as with other flagship devices, the P30 Pro definitely gives you more than your money’s worth. This is a top end phone, have no doubt about it.

The Performance and Power Specs

Obviously, we’re looking for top-end performance from a top end phone, and the P30 Pro certainly delivers on that front. You’re getting octa-core processing made up of three dual-core processor units (a 2.6 GHz, a 1.92 GHz, and a 1.8 GHz model), as well as 8 GB or 6 GB of RAM, depending on which model you go for. That means super-fast speeds and fantastic responsiveness.

As we’d expect from Huawei, this is an Android device. You get the latest Android 9.0 Pie out of the box. There are some nice new features, including a new gesture navigation scheme, as well as a new look, with more rounded icons. And you get the added security, stability, and speeds that come from an up to date operating system.

If you’re looking for great performance, then look no further. The P30 Pro is fast, probably faster than many people need, and very responsive. There’s no lag, even when performing CPU intensive tasks, and even the most demanding user is going to be more than satisfied.

You’re going to be getting a huge display as well. 6.47 inches of screen real estate puts the P30 Pro firmly in phablet territory. There’s more than enough room for typing, viewing, and reading. But beware, this isn’t a phone you’re going to slip easily into your pocket, nor one that you can use one-handed.

Resolution wise you’re getting full HD. 1080 x 2340 pixels gives you around 398 PPI on a 19.5:9 ratio OLED screen. Pictures are crisp and well defined, and colour reproduction is bright and true. Even viewing angles are excellent.

This isn’t the highest resolution screen around, but it’s far from bad. In fact, the P30 Pro’s display is a joy to look at, with even HD video looking crisp and fresh.

If all those tech specs mean nothing to you, just know that pictures taken on the P30 Pro are fantastic. This really is one of the best camera sets we’ve ever seen. From night shots to action shots, you’ll never take a bad photo on the P30 Pro.

There are a ton of extras here, and we can’t mention all of them, but we’ll hit a few high points. First up, the P30 Pro is IP 68 certified, so it’s dustproof and waterproof in up to two metres of water for up to thirty minutes. Always good if you’re a little clumsy.

Like the best top end phones these days, the P30 Pro’s fingerprint sensor is under the display. This means that there’s no visible sensor, you just press your finger to the screen to unlock your phone. Obviously, this gives you better security, as well as the ability to access many online payment services.

The bad news is that the P30 Pro doesn’t have a headphone jack. It does, however, get excellent battery life. A huge 4200 mAh battery should be more than enough to last you through the day. And when you do need charging you have the option of wireless charging or fast charged wired charging that should give you a 70% charge in just 30 minutes.

The P30 Pro comes in plenty of colours, with a choice between Aurora, amber sunrise, breathing crystal, black, and pearl white. There are also different memory versions, with a 128 GB, 256 GB, and a 512 GB option. All come with an SD card slot to add up to 256 GB of extra storage.

So, how much is all this going to cost you? Firstly, this is a popular phone, so you’ll likely find it with all operators and in most high street shops. If you’re shopping SIM free, then expect to pay around £850 for the 128 GB version, £940 for the 256 GB version, and £1050 for the 512 GB version. If you’re shopping on contract then prices go from about £45 a month, with upfront costs going from £9.99.

You’re getting a top end, 4G enabled phone here, so probably the primary thing you’re looking for in a contract is a big data limit. The P30 Pro can use data very fast. However, if you’re around WiFi a lot you might be able to save on monthly costs by going for a lower data limit. Also, watch out for free gifts. A lot of operators are currently offering the P30 Pro with a free gift (the SONOS speaker is a popular offer), so keep an eye out for freebies.

If you’re looking to get savings on the phone itself, don’t hold your breath. This is a pretty new release so we’re not expecting to see discounts until at least the end of 2019. if the P30 Pro is a bit pricey for your tastes, then you might want to check out the P20 Pro instead. It’s an older model, but you still get great specs, and prices are more affordable.

If you’re looking for a top end phone that has the best cameras around, then the Huawei P30 Pro is going to be a great buy. A solid screen, loads of power, and nice extra features on top of a great camera set mean that this is a true flagship phone. It’s not cheap, but it’s definitely worth the money.

We have a soft spot for Huawei’s flagship devices, so it should come as no surprise that we love the P30 Pro. It’s got everything we could wish for in a phone. Sure, there’s lots of power, there’s a great screen, and some nice special features. But the thing we love most is that amazing camera set. A whopping triple lens rear camera is a thing of beauty. If you’re in the market for a top end phone, then we think you’ll love the P30 Pro just as much as we do.