Find the best deals on the Google Pixel 3A using the Tiger Mobiles comparison service. This solid mid-range choice has a lot to offer. There’s plenty of speed, a decent screen and even a solid camera set, all for the cheapest price ever seen on a Google phone. Could this be the phone that you’ve been looking for? Just check out our deals on the Google Pixel 3A below! 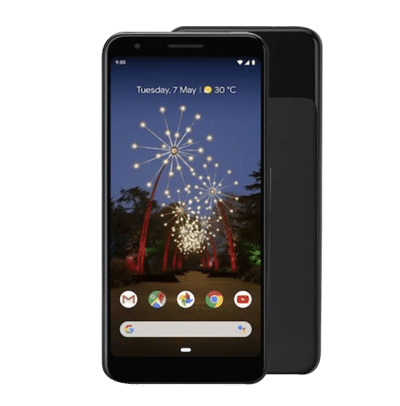 About the Google Pixel 3A

Google have been releasing their own branded phones for a while now. The Pixel range is super clean Android, sleek and good looking. But it’s also pricey. Then along comes the Pixel 3A, Google’s attempt to break into the mid-range phone market. Yes, it’s more affordable than the regular Pixel 3, but are you making sacrifices for that price? The good news is that whilst you may be giving up some super high specs, you’re not compromising much when it comes to performance at all.

Why should you be dying to get your hands on the Pixel 3A? Well, there are obvious answers: it’s fast, looks good, has a decent screen and solid cameras. But it also runs clean Android, with no added bloatware, gets Android updates extremely fast, and is more affordable than ever. If you’re looking for a great mid-range phone, then you’ve found it in the Pixel 3A.

Key Features on the Google Pixel 3A

The Pixel 3A looks neat. It’s got pleasing rounded corners and a sleek profile. It does get bezelling around the top and bottom though, making it look a little old-fashioned when put next to a full front panel mobile. It feels solid and sturdy in the hand though, and whilst it’s a metal and plastic build (as opposed to metal and glass) it doesn’t feel cheap. And that plastic casing does make it nice and light.

Under the hood, there are some satisfying internals. You get octa-core processing, you get a decent amount of RAM, and there is a good OLED display and some nice cameras too. But it’s that clean Android operating system that’s the real seller here. Fast updates and no bloatware, as well as a clean set of Google apps, makes this the perfect Android phone.

You’re not looking at top-shelf prices here, though the 3A isn’t a budget model either. What it is is a very solid mid-range phone at a mid-range price. You get good performance and you don’t have to spend a fortune.

You’re going to be looking for good performance, whatever your budget and the 3A isn’t going to let you down. You get octa-core processing here, with a dual-core 2.0 GHz processor and a hexacore 1.7 GHz processor running simultaneously alongside 4 GB of RAM. No, this isn’t the fastest phone around, but it’s speedy and responsive and more than fast enough for most users.

Obviously, this is an Android phone, and you’ll get Android 9.0 Pie out of the box. This is the newest Android version and gives you more stability and security as well as new features like an updated gesture control set. However, since this is a Google phone it was designed around Android (rather than Android being modified to fit the phone). It’s clean, there’s no bloatware at all, and you’ll get OS updates as soon as they become available, rather than waiting for the manufacturer to tweak the update to fit their specs.

You get excellent performance here. For all but the most demanding users, the 3A is going to be very capable. It’s great at multi-tasking, nice and fast, and definitely responsive. The average user will be more than satisfied with the 3A.

Again, we’re looking at solid specs here. The 3A gets a 5.6-inch display, which is more than large enough for comfortable typing and viewing. However, it’s also small enough that you can fit it nicely in your pocket, and small-handed users won’t struggle to use the 3A.

In terms of resolution you get 1080 x 2220 pixels, so about 441 PPI. And this is an 18.5:9 ratio display (as opposed to the more modern 19.5:9 ratio). It is an OLED screen though, which means you get great colour resolution with true whites and deep blacks.

There are better screens on the market, but not really at this price range. And to be honest, the display on the 3A is perfectly good. It’s pleasant to look at, crisp and clear, and even HD video looks good.

Moving on to the camera set, and we’re getting a nice mid-range set of lenses here. At the front, there’s an 8 MP, f/2.0, 24 mm lens with HDR recording. This is just fine for video calling and even for the odd selfie.

At the rear, there is only a single lens, which is slightly disappointing as dual lenses are becoming standard for mid-range phones. However, it’s a nice camera. It’s a 12.2 MP, f/1.8, 28mm cam. And that comes with dual tone dual LED flash, dual pixel phase detection autofocus, optical image stabilization, HDR and all the other features you’d expect to see on a camera.

Pros might not be sold on this camera set, and that’s fair. But for casual photographers, the cameras on the A3 are pretty good. You’ll get nice, sharp shots even in low light, as well as clear action shots. It’s not a pro camera set, but it is very solid.

As a mid-range phone, we don’t expect a bunch of extra features on the A3. But there are a few things that we should talk about. It does come with the squeeze to launch Google Assistant feature seen on the regular Pixel 3 (known as Active Edge). There’s a rear-mounted fingerprint sensor as well.

As for battery life, you get a solid 3000 mAh battery, which given the screen size should be enough to last you all day. There’s no wireless charging, unfortunately. But you do get fast charge tech for a shorter charge cycle. You also get a 3.5mm standard headphone jack, which is a big plus for some buyers.

Now comes what might be a big deal breaker. There is only one version of the A3 available which has 64 GB of internal storage. Despite this, there is NO support for additional memory, so you can’t add more storage. Google is banking on you storing your stuff in the cloud, but if you’re the kind of person that wants to store data on your device, then the A3 might not be the phone for you. There are also three colour variants: black, white, and purple.

A big advantage to the Pixel 3A has to be the price, so how much is it going to run you? Firstly, let us say that the 3A is fairly widely available. You can get it through Google online, or in many high street shops and through some operators (although not all operators carry Google phones). If you’re buying SIM-free than you’re looking at paying about £399. On contract, you’re looking at paying around £25 a month with £0 down.

If you are contract shopping then data plans should be your biggest concern. So much of a good Android and Google experience involves being online, especially if you’re storing your music and files on the cloud. You might get away with a cheaper, lower data contract if you’re regularly on a WiFi connection, however.

If you want a discount, the bad news is that Google phones are very rarely discounted and you’re unlikely to get serious savings until a new mid-range model is released. However, Google do occasionally give free or discounted gifts with their phones, meaning you might get a Chromebook or a Google Home for a discounted price.

If you want an affordable Google phone, then the Pixel 3A is really your only choice. It’s a good mid-range option, however. Performance and specs are both decent, and you’ll get a solid phone that’s capable of doing anything a regular user needs. It’s not loaded down with special features, but the Pixel 3A is a very good mid-range mobile at a very affordable price point.

Google’s Pixel phones are the cleanest Android mobiles around, but they’re also pricey. So when the affordable 3A was announced we were already excited. And now we’ve seen the features, we’re even more excited. There’s lots of power and a great screen and camera set, all for a bargain price. This is simply one of the best mid-range phones around, and if you’re looking for performance on a budget then you’ll love the 3A as much as we do.