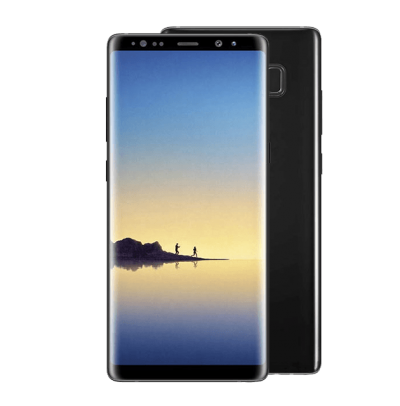 About the Galaxy Note 8

Samsung are one of the best known mobile manufacturers in the world, and the Galaxy phone series is a huge market leader. Note devices are Samsung’s phablet mobiles, and the newest incarnation, the Note 8 is the company’s premier (and most expensive) phone. But with a disastrous ancestor (the exploding Note 7), does the Note 8 really have what it takes to reclaim Samsung’s reputation. The answer to that can only be a resounding yes.

Why should you want to get your hands on one? There’s stunning power here, with plenty of RAM to back things up, there are excellent cameras too, and tons of special features. But the real crowning glory of the Note 8 has to be that big screen with super high resolution. Yes, the Note 8 is expensive, but it’s also incredibly brilliant.

The Note 8 could only be a Samsung. There are curved edges, sleek lines, and that signature Infinity display gently curves around the edges of the device making the front panel almost entirely bezel-less. This is a glass body wrapped around an aluminium frame, so it’s as lightweight as a phone this big can be, and stunningly beautiful too. The Note 8 is a behemoth though, and you won’t be using it one handed.

Under that amazing design you’re getting some seriously impressive specs. We’re talking octo core processing here, and a massive 6 GB of RAM. The screen is AMOLED (this is Samsung, after all), and gets fantastic resolution specs. Plus, you’re getting an amazing camera set, with dual rear cams.

This is a premium product, and we’d expect nothing less than the best at this price point. Fortunately, Samsung delivers in spades, and this has to be one of the best and most powerful devices on the market.

We want top end performance here, and the Note 8 isn’t going to disappoint. You’re getting octo core processing power with a quad core 2.3 GHz and a quad core 1.7 GHz processor running side by side. There’s also an incredible 6 GB of RAM. That adds up to a phone that’s lightening fast, very responsive, and excellent at multi tasking too.

Being a Samsung we’re obviously looking at an Android device. Out of the box you’re running Android 7.0 Nougat, which gives you plenty of user friendly features as well as an intuitive user interface. The Note 8 will be top of the list to get the update to the new Android 8.0 Oreo as well.

When it comes to performance there’s really nothing that we can say here except wow. The Note 8 is fast and more than capable of doing pretty much anything. If performance is key to you in a mobile, then look no further than the Note 8.

Moving on to that big selling point: the screen. The Note 8 sports a massive 6.3 inch display, which should give you more than enough room to type comfortably. This is an Infinity display too, meaning the screen curves around the edges of the device, giving you no bezels on the right and left.

In terms of resolution you’re getting an awesome 1440 x 2960 pixels, so around 521 PPI. Okay, there are higher resolution screens out there, but not many. And since this is a Samsung Super AMOLED display, you’re getting crisp images and true colours.

The display on the Note 8 is breath taking. From high definition video to brilliantly coloured photos, this is one of the best screens around.

Samsungs generally have decent cameras, and the Note 8 is no exception to this. At the front you’re looking at an 8 MP cam, which is more than good enough for selfies and video calling and the like. But the real deal is at the back.

The rear camera of the Note 8 is actual two cameras, you’re getting a dual 12 MP device. That’s 26 mm with an f/1.7 aperture, giving you massive detail. You also get all the normal camera additions, including dual LED flash, auto focus, 2x optical zoom, simultaneous video recording and picture taking, HDR, and everything else you’d expect.

If you love taking pictures, then you’re going to love the Note 8, it’s really that simple. The camera interface is easy to use, and the resulting photos are beautiful, with perfect colour reproduction and excellent clarity.

We really can’t go into every feature on the Note 8, there are just too many of them, but there are a few high points. This, like most Note devices, is a stylus device. The stylus slides neatly into the casing, so you won’t lose it. The S Pen, as Samsung call it, is more precise than ever, and even allows you to write when the screen is turned off (it’ll save your notes for you). It’s also capable of all kinds of smart tricks, like translation and turning drawings into gifs.

You’ll be getting a fingerprint scanner, rear mounted, but that’s fairly standard at this price range. But you’ll also get face recognition unlock and an iris scanner, so you’ll know that your mobile is truly safe.

The Note 8 features Bixby, Samsung’s relatively new digital assistant (think Siri, but for Samsung), and there’s now a dedicated side button to call up Bixby. A 3300 mAh battery promises up to 22 hours of active use per charge, and there’s wireless charging too for when that juice finally runs out.

The Samsung Galaxy Note 8 is a serious top end flagship device. Yes, it’s great looking, but it’s also sporting a huge, high res display, a fantastic camera set, and tons of processing power to keep it lightening fast. If you’re looking for the best phone that money can buy then the Note 8 has to be one of the best choices you can make.

Connectivity wise you’re getting the usual suspects. There’s 3G, 4G, Bluetooth and WiFi. Internally you’re looking at either 64 GB, 128 GB or 256 GB of storage, depending on which model you go for (more memory means more expensive though!). But Samsung have also provided an SD card slot, so you can add up to 256 GB of additional storage should you need it.

Bottom line time: what don’t we like? That’s tough. We do feel like battery life could be a little better, but with a screen this big getting long battery life is a bit of a pipe dream. The Note 8 is also slightly bulky and heavier than we’d prefer, but again, that’s the price we pay for that huge screen and glass build. On the whole though, we’re in love with the new Note, it’s simply amazing. If you want a real top notch mobile, then the Samsung Galaxy Note 8 should be at the top of your list.