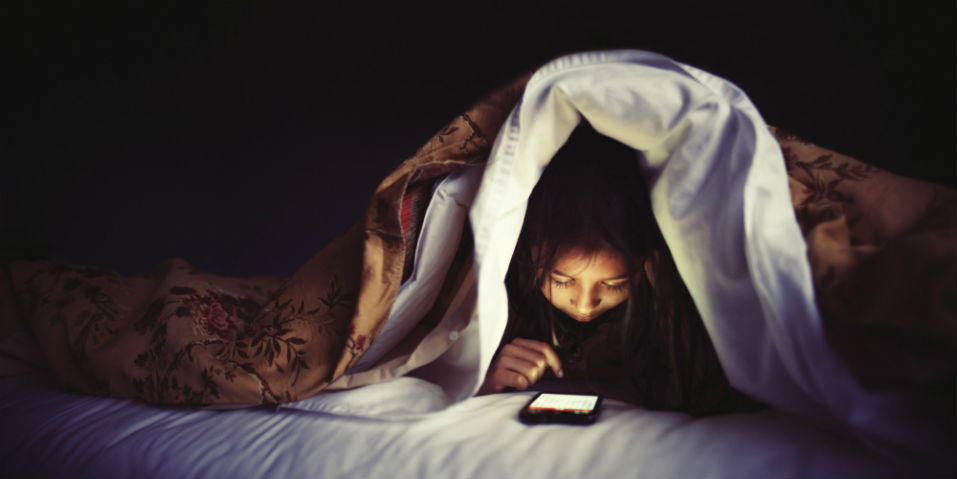 The majority of parents are concerned about their children using mobile devices, tablets, laptops, games consoles and ebooks near bedtime according to a new survey. With respondents suggesting they feared late night usage would negatively affect their child's health, attention span or expose them to inappropriate content.

More than 1,600 parents of UK children aged between 6 and 14 years old were surveyed by the mobile phone comparison site TigerMobiles.com. Asking parents about their children's use of digital devices, the researchers found that 89% of children had at least one device where they sleep and is used near bedtime. [1]

Brandon Ackroyd, head of customer insight at TigerMobiles.com, who commissioned the survey said:

Our research reveals that the vast majority of parents are worried about their children using devices just before bed. Because children have easy access to tablets and smartphones it's far harder to police their use. All the research shows that blue light emitted from the devices can cause sleep deprivation. We're seeing more and more schools use tablets as a replacement for textbooks too so the problem of poor sleep amongst children is likely to get worse. Our findings indicate that parents do want help and an integrated approach involving parents, teachers, and healthcare professionals is necessary to reduce access to these devices and encourage good sleeping habits near bedtime.

The survey comes after a team from King's College London and Cardiff University reviewed available evidence on connections between child sleep patterns and device use. The academics looked at 20 studies involving more than 125,000 children who had an average age of 14. The researchers found that children and teenagers who use mobile phones and tablets at bedtime are more than twice as likely to be getting too little sleep as those who don't. [7]

Electronic devices are thought to adversely impact sleep through a variety of ways including displacing, delaying or interrupting sleep time – psychologically stimulating the brain and affecting circadian timing, sleep physiology and alertness.

Our study is the first to consolidate results across existing research and provides further proof of the detrimental effect of media devices. Sleep is an often undervalued but important part of children's development, with a regular lack of sleep causing a variety of health problems.

This survey was commissioned by Tiger Mobiles and conducted by polling agency Carter Digby within the United Kingdom between October 18th and October 31st, 2016 among 1635 adults whom have children aged between 5-14 years old. The survey utilised Carter Digby's proprietary omnibus platform. Respondents for the survey were selected from among those who have agreed to participate in Carter Digby Interactive surveys.